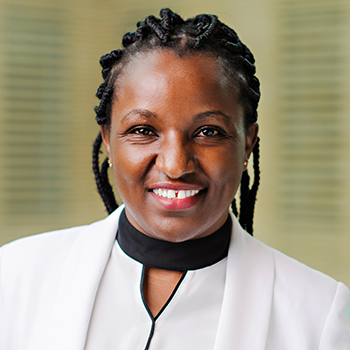 Though focused on a diverse range of topics, from gender gaps in education to agriculture in Kenya, Muthoni Nganga’s research is connected by a central motivation: to explain and address inequities. An assistant professor of Economics at Wilfrid Laurier University’s Lazaridis School of Business and Economics, Nganga was initially drawn to her discipline by its real-world applications.

“In economics, we use data to explain the relationship between different variables, such as test scores and class sizes, or agricultural yields and the amount of agricultural technology that is applied,” says Nganga. “I am interested in using numbers to explain what is happening, contribute to academic literature and, hopefully, to guide policy.”

Born and raised in Kenya, much of Nganga’s research is focused on improving quality of life in her community of origin. In collaboration with research colleagues at the University of California, Berkeley, she is currently launching a pilot study that will test the viability of interventions aimed at increasing the adoption of agricultural technology by Kenyan female farmers.

“The nature of agriculture in some developing economies, like Kenya, is that within the same family, farm plots tend to be divided up between men and their wives,” says Nganga. “What we find is that plots managed by men are likely to have higher yields. In addition, men will mostly manage plots that produce more commercial crops and, as head of the household, tend to allocate more resources to them. The woman is left to work on her own plots, in addition to her husband’s, but does not control many of the household resources. So the yields from her plots tend to be much lower.”

“Education is human capital, and human capital is as important as any other investment when it comes to contributing to economic growth."

For their study, Nganga and her partners plan to provide women farmers with seeds to grow a modern variety of cassava, a starchy root vegetable, that matures more quickly than the traditional cassava varieties. It is easy to store and drought-resistant, which is key in a climate that receives inconsistent rainfall.

Nganga hypothesizes that by reducing barriers to seed and information access, female farmers will be more likely to plant this more profitable alternative.

“If we can help increase the yields from women’s plots, the whole household will benefit from the increased income,” says Nganga. “It would also increase women’s autonomy because, with more income, they can make more decisions. Women contribute more than 50 per cent of all agricultural labour in Kenya, so they are an important factor when it comes to agricultural production in the country.”

Another research focus for Nganga is gender gaps in education. For her PhD thesis, she compared academic achievement between public and private school students in Kenya, including the performance gaps between male and female students in mathematics.

“Education is human capital, and human capital is as important as any other investment when it comes to contributing to economic growth,” says Nganga. “We have to look at education as an investment and we can't leave some groups behind. That includes girls and immigrants.”

In partnership with colleagues at the Lazaridis School, Nganga hopes to measure the effects of peers on long-term educational outcomes of immigrant and non-immigrant Canadians. Nearly a year after moving to Canada, she is keen to apply her research interests to her new local context.

“I am already working on research proposals with other Laurier faculty members who have been doing the same kind of work that I’m doing, but using Canadian data sets,” says Nganga. “I have found my colleagues in the Department of Economics to be so welcoming.”