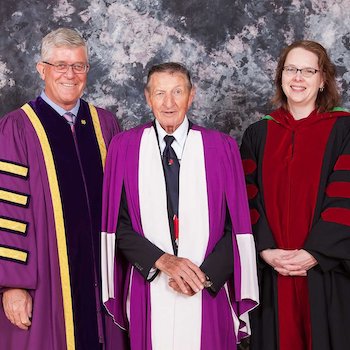 Wilfrid Laurier University mourns the loss of "Canada’s Hockey Dad," Walter Gretzky, who passed away March 4, 2021 at the age of 82.

A great friend of Laurier, Mr. Gretzky received an Honorary Doctor of Letters degree from the university in 2014.

Admired by Canadians from coast to coast, Mr. Gretzky was a linchpin of the Brantford community, offering countless hours to volunteer and charitable efforts. Known as Canada’s Hockey Dad as the father of National Hockey League player Wayne Gretzky, Mr. Gretzky was perhaps better known for the example of kindness and giving back he set for all Canadians.

Born in Canning, Ont., Mr. Gretzky married his wife, Phyllis, in 1960 and the couple raised five children. Mr. Gretzky worked at Bell for more than 30 years and kept his roots firmly planted in Brantford.

A strong supporter of the Canadian National Institute for the Blind, Mr. Gretzky's fundraising efforts included the Walter Gretzky CNIB Golf Classic Tournament, held in cities across the country. Other initiatives include the Wayne and Walter Gretzky Scholarship Foundation, which helps students with vision loss to study at the post-secondary level, and the SCORE summer program, which focuses on developing students’ personal development, leadership skills and civic responsibility.

In 1991, Mr. Gretzky suffered a life-threatening brain aneurysm and after recovering became a national spokesperson for the Heart and Stroke Foundation of Canada. The author of two books, Mr. Gretzky has been recognized with many honours, including Brantford’s Citizen of the Year in 1996 and the Order of Canada in 2007.

Flags will fly at half-mast across Laurier’s campuses in Mr. Gretzky's honour.