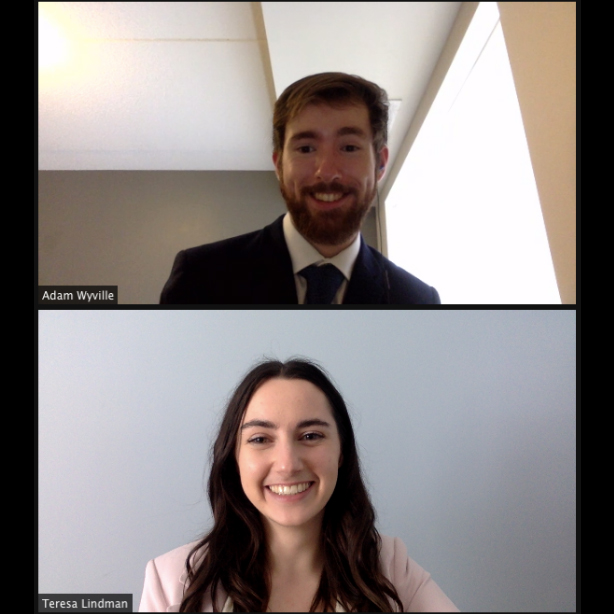 For the second year in a row, a Wilfrid Laurier University team won McGill University’s Moot Court Invitational, an annual tournament where teams from universities across Ontario and Quebec compete to best represent both sides of an appeals court case.

Teresa Lindman, a third-year political science student, and Adam Wyville, a fourth-year business administration student, took home the title on Jan. 31 after facing a team from the University of Toronto in the finals.

On top of that win, Lindman and Avery Wilson, a dual arts and law degree student at Laurier, were both honoured with Oralist Awards in recognition of their individual performances. Wilson and Bria Steele, a Laurier psychology student, finished as quarter-finalists in the competition. Five teams from Laurier competed in the Moot Court Invitational alongside 37 other teams.

“I had no idea what mooting was just a few months ago,” said Lindman, who joined the club during the fall term. “It’s been so amazing learning from Adam and other members of the club and it feels really special to win it and keep Laurier’s legacy alive.”

In advance of the competition, teams were provided details of the case, for which they were asked to prepare arguments from both the appellant’s and respondent’s sides. Students took on the case of Andrew Wakeling, who was the target of a Canadian drug investigation in 2006. Wakeling’s conversations were monitored and recorded by the RCMP and those recordings were later shared with U.S. authorities, which led to his arrest in Minnesota. Wakeling argued that the disclosure of those recordings breached his Charter rights and eventually appealed the case to the Supreme Court of Canada.

“It’s more of a program than a club, because it’s a lot of work and you’re gaining really valuable skills. We make sure students are developing the knowledge and skills they’ll need in law school and making connections.”

At the McGill competition, Wyville and Lindman alternated between arguing that it was constitutional for the RCMP to share the recordings with U.S. authorities and then arguing it was not. They learned which side they would be representing only a few minutes before each round.

“Because you have to prepare both sides, you can’t become over-committed to one argument,” said Wyville, who serves as co-president of Laurier’s Moot Court club. “You have to be ready to argue for both. And because judges can interrupt you with questions and because your opponents might be making different arguments than the last round, you always have to be ready to adapt on the fly.”

The five Laurier teams met virtually nearly every evening leading up to the competition to prepare and give everyone a chance to offer suggestions and ask questions. Practicing lawyer and contract faculty member Jeffrey Boich (BA ’88) has also been meeting with the club regularly to provide his expertise and guidance, as he has since the club was created in 2017.

Most members of Laurier’s Moot Court club are interested in studying law after graduation or are already studying law through the university’s joint arts and law degree program with the University of Sussex in the U.K. Alumni of the club are studying or have been accepted to study at top law schools in Canada and the United States.

“It’s more of a program than a club, because it’s a lot of work and you’re gaining really valuable skills,” said Wyville. “We make sure students are developing the knowledge and skills they’ll need in law school and making connections. It’s much more than just something you put on your resume.”

“I’ve always had this ambition to go to law school, but I wasn’t sure if I actually wanted to practice,” said Lindman. “I’m reconsidering that avenue now, just because of how much fun I’m having. I’ve been developing skills I didn’t even know that I had.”

Teams from Laurier’s Moot Court club will compete at the University of Toronto Cup on Feb. 13 and 14, with more competitions throughout the semester. The club accepts new members every fall term, from September to early October. To find out more, visit the Laurier Moot Court club Instagram page.