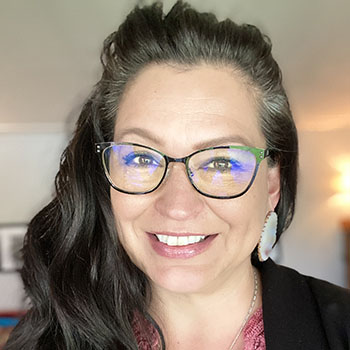 A powerful and personal work of poetry by Wilfrid Laurier University Indigenous Events Support Coordinator Corri Daniels has been recognized with a national honour.

Daniels’ poem A Memory of Mary was recently listed among three finalists for a 2020 Indigenous Voices Award (IVA) in the unpublished poetry in English category. The IVAs support and nurture the work of Indigenous writers and support Indigenous artistic communities. Award winners will be announced during a virtual gala taking place June 21, National Indigenous Peoples Day.

“When I was a child and found out I was adopted, I asked my adoptive mother, 'Who is my mother, where did I come from?’” recalls Daniels. "My adoptive mother said, ‘Here’s all I have’ and handed me a few pieces of paper. One of those pieces of paper was a very vague document giving information about ‘Mary,' my birth mother. Her full name wasn’t on it. It was a photocopy with things scribbled out.

"I didn’t feel any better after reading it because I still really didn’t know anything. I took a lot of the information on the paper, which I had memorized, and turned it into this poem."

The IVA nomination is the latest in a series of accolades for Daniels, who was longlisted for a 2017 CBC Short Story prize, selected to participate in the 2019 Emerging Indigenous Writers Reading Series and recently published work in Chapter House Journal, an online literary journal promoting the ideals and vision of the Institute of American Indian Arts.

Daniels says she considers sharing her personal history as a Sixties Scoop survivor a responsibility. During the Sixties Scoop, more than 20,000 Indigenous children across Canada were removed from their families and communities to be placed in the child welfare system.

“Basically, my life has been sorting out what that experience means," says Daniels. "During the last three years I have been doing a lot of work on my own healing journey and understanding why I am the way I am. I didn’t grow up in my culture. I grew up in a middle-class, Dutch, white family. I never understood why this had to happen. Now, being almost 51, I get it. And I feel like I have a responsibility to share my story with whoever wants to hear it."

Daniels says writing classes at Laurier played a big role in helping her find her voice. She wrote A Memory of Mary as a final project for a creative writing class taught by Professor Tanis MacDonald, who Daniels considers among her greatest writing mentors, along with Laurier English Professor Tamas Dobozy.

"Corri is most deserving of this award as an emerging writer who works hard at her craft and is never afraid to get to the roots of a story or a poem," says MacDonald. "I feel honoured to have watched her writing grow during the past few years and happily predict that she will have more successes to come."

Daniels says she is honoured to be named among Indigenous writers she respects greatly, including IVA nominees Jesse Thistle, Arielle Twist, Rene Meshake and Helen Knott.

“It’s just amazing to me when I look at all of these names and works," says Daniels. "It makes me so proud that all of these Indigenous people are getting noticed because their voices are really important.”

Administered by the Indigenous Literary Studies Association, the IVAs were established through a crowdfunding campaign in 2017 after several Canadian media professionals made controversial comments about supporting an award for cultural appropriation in literature.

"For every negative thing, a positive thing can come out of it,” says Daniels. “These awards are about lifting Indigenous people’s voices because we’ve always been kept at a different level. When you think about the history of colonization, the residential schools, the Sixties Scoop, how no ceremonies were allowed and we couldn’t speak our language, how we couldn’t be raised by our parents, how we couldn’t leave the reserve – there were so many things we weren’t allowed to do.

"Now we are celebrating Indigenous culture and this is a real indicator of hope. It’s about our own sovereignty.”

A Memory of Mary

Mary carried me for 9 months and

in the document I have held onto from Alberta Social Services,

Mary was described as a

who was well groomed

Mary had many siblings and

a child before me. But that child was

being raised by someone else. (no more information was provided).

Mary worked as a waitress.

Mary was not allowed to hold me or see me

I spoke to Mary on the phone a few times.

But then we lost touch

Because I was afraid and so was Mary.

Mary passed away in 2003. I found out about her death 9 months later.