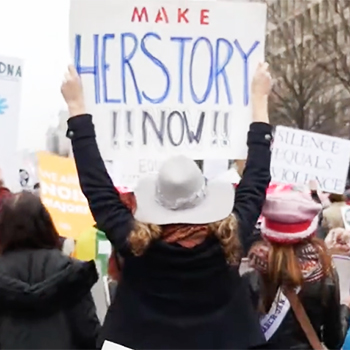 WATERLOO – A new study co-authored by researchers at Wilfrid Laurier University found that political partisanship plays a central role in how people remember events. When more than 300 American citizens were shown identical video footage from the 2017 Women’s March protest, participants who self-identified as supporters of former president Donald Trump reported seeing a greater number of negative events, such as protestors destroying property, even though those events did not occur.

“Participants who recalled these false perceptions felt that the protestors’ tactics were extreme, which ultimately fostered greater opposition to the movement and its cause,” said co-author Eden Hennessey, adjunct faculty member in Laurier’s Department of Psychology. “Our findings highlight the possibility of a feedback loop in which partisanship motivates different perceptions of the exact same politically relevant event, and such perceptions influence people to cling more tightly to their original partisan stance.”

The research team, which included Laurier Professor of Psychology Anne Wilson and Matthew Feinberg from the University of Toronto’s Rotman School of Management, was inspired by Feinberg’s past research on “the activist’s dilemma,” which compels protestors to decide between capturing attention through extreme tatics and diminishing support for the movement. Although there is evidence demonstrating that violence and anarchy turns off would-be supporters, the researchers were curious whether a peaceful protest like the Women’s March would still be perceived through a partisan lens.

Participants watched an 87-second video montage from the Women’s March event on Jan. 21, 2017 in Washington, D.C., which featured crowds chanting, holding signs and marching. When the video finished, paricipants were asked various questions about the video’s content. While most people accurately remembered events that did happen in the video, Trump supporters reported seeing a greater number of false events, such as protestors burning things or breaking windows.

“Most of the time, memory is reconstructive and will have some amount of error,” said Wilson, whose research interests include personal and collective memories. “One of the reasons that there was relative agreement for those true events as opposed to the false events that were more unflattering is that there was no strong motivation in one direction or another. Whereas in the case of the unflattering events, people may have had preconceptions that could lead to mismemory.”

The authors note that a similar phenomena may be observed in liberal-leaning Americans if the current study were replicated in the context of a conservative protest event, such as an anti-abortion rally. Wilson believes that the growing culture of political polarization in North America is contributing to ever-increasing levels of confirmation bias, meaning that when we have a preconceived idea about something, we are more likely to process information in a way that confirms what we initially thought.

“People have become more and more accepting of caricatures that demonize people on the other side of the political spectrum,” said Wilson. “There is evidence from a number of labs showing that a lot of the normal information processing that we do, such as weighing the strength of evidence and really looking at the facts in front of us, goes out the window in the context of stark polarization and we just fall in lockstep with whatever the party line is. This can be really damaging to both sides.”

Both Hennessey and Wilson see their results as a “reality check” for citizens to be conscious of how negative media coverage and repetitious social media “loops” may influence their perceptions of future protests.

“In many cases, these protests are extremely important, and if we view them through a lens clouded by preconceptions, we may mischaracterize them or miss the point,” said Wilson. “We need to make sure that we are putting energy into these fights in a well-calibrated way based on what’s actually happening on the ground, not fighting over an illusion.”