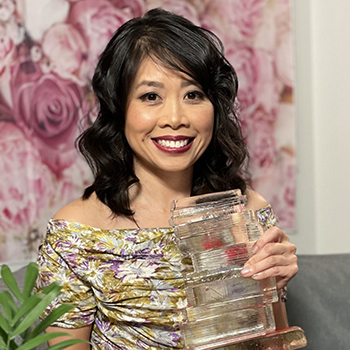 Brantford – Souvankham Thammavongsa, an instructor in the English program at Wilfrid Laurier University’s Brantford campus, has won the 2020 Scotiabank Giller Prize for her short story collection, How to Pronounce Knife.

How to Pronounce Knife (McClelland & Stewart) is a collection of stories focused on characters struggling to make a living, including the daily lives – both humorous and tragic – of immigrants. Thammavongsa highlights the hopes, endeavours and hardships of unforgettable characters caught between cultures, languages and values.

“Thank you to the jury. I don't envy you; the decision must have been difficult and I'm so thankful to my fellow nominees... your brilliance is why this means so much,” said Thammavongsa in her acceptance speech. “Thirty-six years ago, I went to school and pronounced the word ‘knife’ wrong, and I didn’t get a prize. But tonight, there is one. Thank you, thank you, thank you.”

Thammavongsa will receive $100,000 courtesy of Scotiabank. Thammavongsa was awarded the prize during a virtual event hosted by Canadian actor Eric McCormack. During the broadcast, frontline workers read snippets from the works of all the finalists.

On Sept. 8, Thammavongsa’s work, along with 13 other titles, were chosen from a field of 118 books submitted by publishers all across Canada. On Oct. 5, a panel of judges announced the five finalists for the Scotiabank Giller Prize shortlist.

While How to Pronounce Knife is Thammavongsa’s first work of fiction, she is also the author of four poetry books: Cluster (2019), Light (2013), Found (2007) and Small Arguments (2003). Her short stories have won an O. Henry Award and appeared in Harper’s, The Paris Review, The Atlantic and Granta. Thammavongsa has also been announced as a judge for the prestigious 2021 Griffin Poetry Prize by the Griffin Trust for Excellence in Poetry.

This year, Thammavongsa is teaching “Introduction to Creative Writing” and “Creative Writing: Short Story” for the English program at Laurier’s Brantford campus.

“We are so proud that our creative writing professor, Souvankham Thammavongsa, has won the 2020 Scotiabank Giller Prize,” says Ken Paradis, English program coordinator at Laurier’s Brantford campus. “Souvankham has quickly established herself among our students as a beloved and valuable instructor, and now they can also know that they are learning the craft of creative writing from Canada's very best.”