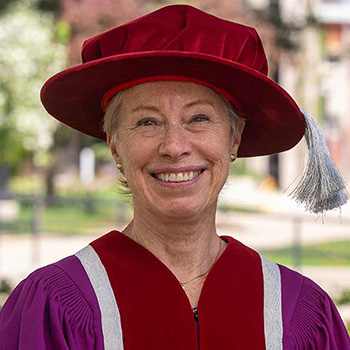 Mercier’s reappointment was unanimously approved by the Board of Governors with full support of the university Senate. Her second term as chancellor begins Oct. 28, 2020 and will be celebrated when the university is able to host convocation ceremonies. Mercier has served as Laurier’s chancellor since October 2016.

“I am delighted that Eileen has accepted the offer to continue in this role,” said Laurier President and Vice-Chancellor Deborah MacLatchy. “The university has benefited greatly from her leadership and generous volunteer engagement as our chancellor. Our community is grateful to have one of its distinguished alumni continue to serve in this capacity.”

As chancellor, Mercier serves as a member of Laurier’s Board of Governors and Senate, as well as the Senate honorary degree committee and Board of Governors development committee. She also presides over convocation ceremonies and officially bestows all degrees and diplomas.

Mercier says she will continue to engage with Laurier’s internal and external stakeholders to further the university’s mission during her second term as chancellor.

“It is my honour and privilege to serve as Laurier’s chancellor for the next four years,” said Mercier. “The Laurier community is special, and I am grateful for the opportunity to continue being a part of it in this way. I look forward to celebrating the incredible achievements of Laurier’s graduating class of 2020 as soon as convocation ceremonies can be held.”

With nearly 50 years of business leadership experience, Mercier is among the first women in Canada to build a career in corporate governance. She is the chair of the board of directors of Payments Canada, the organization responsible for the clearing and settlement of financial transactions in Canada. Previously, Mercier served as chair of the Ontario Teachers’ Pension Plan board, president of Finvoy Management Inc. and senior vice-president and chief financial officer of Abitibi-Price Inc.

Mercier has also served on the boards of corporations and healthcare and arts organizations. She is a fellow of the Institute of Corporate Directors and the Institute of Canadian Bankers. In 2011, she was named one of Canada’s 25 Women of Influence and has been named one of Canada’s 100 Most Powerful Women four times in the Accenture corporate directors category and was inducted into the Women’s Executive Network Hall of Fame in 2018. She holds honorary doctorates from Laurier and York University.