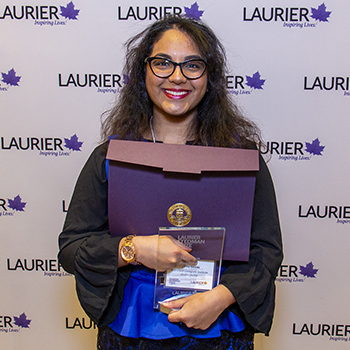 BRANTFORD – A panel made up of academics, award-winning authors and the former Speaker of the Ontario legislature selected a short story titled The Year I Dreamt by Samiha Sanjida as the winner of the second-ever Laurier Stedman Prize. Results of this biennial competition were announced at a special ceremony on Friday, Feb. 7 at the Brantford Golf & Country Club. A student at Brantford Collegiate Institute and Vocational School, Sanjida receives a $3,000 cash prize, possibly the largest prize of its kind for a creative fiction competition open exclusively to high school students.

First awarded in 2018, the Laurier Stedman Prize is funded through an endowment and estate gift given to Wilfrid Laurier University by the late Miss Mary Stedman for the purpose of celebrating and promoting arts and culture. Stedman, who passed away in 2014, was a great champion of Laurier’s Brantford campus, and during her lifetime served as an executive member of the Canadian Booksellers Association.

The university created the Laurier Stedman Prize program, managed under the auspices of the English program in the Faculty of Liberal Arts, as a way to honour Stedman’s wishes. Participants were asked to submit original, unpublished works of fiction, up to 1,500 words in length. The competition was open to students studying within the boundaries of Brantford’s local school boards. It drew entries from nearly every secondary school in the Grand Erie and Brant Haldimand Norfolk Catholic District school boards, as well as W. Ross Macdonald School.

All entries were submitted anonymously and vetted by a series of sub-juries. The top 10 were then passed on to a prize jury to rank the finalists, and ultimately select the winner. The prize jury was chaired by Kathryn Carter, Laurier’s dean of the Faculty of Liberal Arts, and also included: award-winning and New York Times bestselling author Susanna Kearsley; Emily Urquhart, award-winning writer and folklorist and past Edna Staebler Writer in Residence at Wilfrid Laurier University; Dave Levac, a retired educator and former MPP for Brant; and Heidi Northwood, senior executive officer at Laurier’s Brantford campus.

“The quality of submissions for the Laurier Stedman Prize this year was exceptional,” said Ken Paradis, English professor at Laurier’s Brantford campus and administrator of the Laurier Stedman Prize competition. “We were thrilled to see the level of interest in this competition among the student authors, and very grateful to the teachers at each school who coordinated the entries; without them this contest would not have been possible. It’s extremely gratifying for Laurier’s English program in Brantford to play a role in recognizing the rich talent among this generation of up-and-coming authors.”

“I am proud of this evening’s event, and of Wilfrid Laurier University’s role in celebrating our young storytellers,” said Heidi Northwood, Laurier’s senior executive officer. “The Laurier Stedman Prize is a wonderful example of what we do best at Laurier – collaborating with partners to create opportunities that benefit our community. I’d like to think that Miss Stedman would approve of this celebration of our local student writers.”

In all, $10,000 in prize money was awarded at the Laurier Stedman Prize celebration. In addition to Sanjida’s $3,000 grand prize, the jury awarded two second-place prizes of $2,000 each, and three third-place prizes of $1,000 each. The top 10 submissions as ranked by the prize jury are:

The Year I Dreamt by Samiha Sanjida, Brantford Collegiate Institute and Vocational School

Just Like That They Were Strangers by Sierra Miller, Holy Trinity Catholic High School

Read the grand prize-winning story and additional information on the Laurier Stedman Prize at wlu.ca/LaurierStedmanPrize.

Members of the Stedman family were active in the business, social and cultural fabric of Brantford and Brant County for more than a century. Mary Stedman’s father, Samuel W. Stedman, went into business with his brothers in 1904, establishing the first Stedman’s Bookstore on Colborne St. in Brantford. They went on to create a chain of five-and-10 cent department stores with locations across Canada. The Stedman name has become synonymous in Brantford with generosity and community building.

Mary Stedman served as managing director of Stedman's Bookstore Ltd. from 1950 to 1974 and was a member of the executive of the Canadian Booksellers Association. She was also the director and former chair of the bursary committee of the Samuel W. Stedman Foundation.

Mary Stedman was an early supporter of the idea of a university in Brantford, providing an important kick-start as one of the first donors to the fledgling campus in 1999. The university’s bookstore bears the Stedman family name in recognition of their exceptional generosity. Gifts from Mary and the estate of her sister Ruth supported the construction of the university’s Research and Academic Centre. In accordance with Stedman’s wishes, the Brantford campus bookstore is open not only to Laurier students, but to everyone in the community.