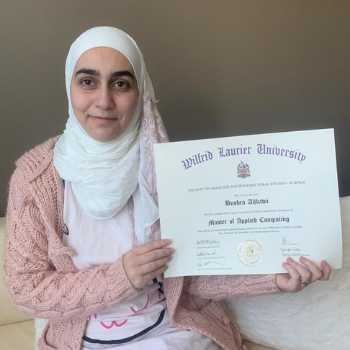 The COVID-19 pandemic has changed many things, but certainly not the pride and admiration Wilfrid Laurier University’s International Students Overcoming War (ISOW) club has for its scholars.

On Nov. 27, Laurier’s ISOW club celebrated new graduates Bushra Al Jbawi (MSc ‘20) and Meera Tawil (BBA ‘20) during its annual reception, held virtually this year due to the pandemic. Al Jbawi and Tawil, both from Syria, studied at Laurier with scholarship support from ISOW, a student-led and student-funded humanitarian initiative launched in 2015. Each year, ISOW supports students from international conflict zones in their pursuit of post-secondary education.

“In a way, the virtual event was even more special because it celebrated our experiences and overcoming so many other challenges.”

Al Jbawi and Tawil were joined by Leen Al Zabaik, director and co-founder of Jusoor, an ISOW partner organization, Laurier faculty and staff, ISOW members, and friends and family in Syria during the hour-long virtual celebration.

“Laurier’s ISOW scholars continue to bring dynamism, resilience, energy and commitment to the university community,” says Gavin Brockett, associate professor and acting dean in the Faculty of Arts. “Year after year, we learn from – and with – our ISOW scholars.”

Brockett serves as an ISOW faculty advisor along with Bina Mehta, contract teaching faculty in the Faculty of Arts. Brockett praised the club’s student leadership team for its continued support of ISOW scholars throughout their studies and experience in Canada.

That support has been invaluable to Al Jbawi.

“Even before arriving, ISOW members were there for me,” says Al Jbawi. “They met me at the airport, found me housing – they had every aspect of my transition to Canada covered. They are there to help with anything you need.”

Al Jbawi successfully defended her thesis on machine learning via Zoom in September but says preparing for the milestone event was stressful. She appreciated the extra check-ins and support from ISOW members during her preparations.

Like Al Jbawi, Tawil is also grateful for the support of ISOW during her undergraduate studies at Laurier’s Waterloo campus.

“ISOW is different, it’s so much more than a scholarship opportunity,” says Tawil. “ISOW is a network of kind and caring people who knew our situation. We didn’t have to advocate for ourselves continuously because they made us feel that our time at Laurier was going to be great. And it was.”

Though Al Jbawi and Tawil had been looking forward to crossing the convocation stage with the rest of Laurier’s fall 2020 graduating class, the virtual ceremony and graduation boxes, which contained their official degrees and Laurier paraphernalia, were golden alternatives.

“It was nice to be recognized,” says Tawil. “In a way, the virtual event was even more special because it celebrated our experiences and overcoming so many other challenges.”

Laurier’s ISOW scholarship program has supported 19 international student scholars since its inception in 2015.