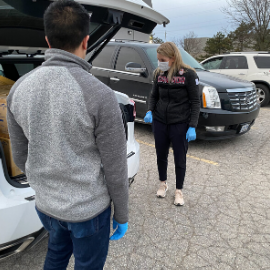 The third-year Health Sciences student at Wilfrid Laurier University in Waterloo is the founder of Health Matters Worldwide, a non-profit organization that collects unused medical supplies like non-sterile gloves, gowns and face masks from hospitals in the Greater Toronto Area and donates them to under-serviced medical facilities around the world. With international travel suspended and the continued spread of COVID-19 in Canada, Chow has redirected his organization’s donation efforts to support frontline healthcare workers at home — and his generosity hasn’t gone unnoticed.

On April 6, Canadian actor and Deadpool star Ryan Reynolds thanked Chow in a FaceTime conversation for his donation of 15,000 pairs of gloves to hockey legend Hayley Wickenheiser, who took to Twitter to appeal for donations of personal protective equipment for frontline healthcare workers in Toronto. Chow was driving home from Markham-Stoufville Hospital, where he had dropped off 12,000 pairs of gloves and 500 N95 masks, when he heard Wickenheiser’s request being discussed on the radio. Reynolds amplified Wickenheiser’s call on Twitter, offering autographs and movie memorabilia to those who donated.

“I had access to more supplies than the average person because of Health Matters Worldwide and wanted to spread supplies around,” says Chow. “As soon as I got home, I emailed Hayley's hockey organization and within minutes there was a plan to deliver the supplies to a central drop-off location in Burlington that night.”

“FaceTiming with Ryan was really cool,” says Chow. “Here was a superhero calling me a superhero — I’m just an undergrad.”

Noah! Great chatting with you on FaceTime tonight. Thank you for all you’re doing... you’re a 🇨🇦 hero.

“I had to turn off my Twitter notifications because I couldn’t get anything done,” recalls Chow. “I thought to myself, ‘This is what it must be like to be a celebrity!’”

Chow didn’t let his 15 minutes of fame get to his head. On April 11, Chow and his father left their Pickering home and headed north for Temiskaming Hospital, located in the town of New Liskeard, to donate 4,000 pairs of gloves and 1,000 N95 masks. The small community is near to Chow’s heart as his father is from there. While the community’s COVID-19 caseload stands at 12 at the time of publishing, Chow says he worries that further spread could severely impact the community’s medical resources.

“It’s a small community with limited supplies,” says Chow. “They don’t have many ventilators so further spread of COVID-19 could be detrimental.”

“I’m happy to help out any way I can,” says Chow. “We all have a role to play during this time and this is mine.”

Offering support to community healthcare facilities isn’t new for Chow, who founded Health Matters Worldwide in 2017 after an eye-opening medical volunteer experience in some of Nepal’s mountain village hospitals.

“The lack of access to basic services and supplies was overwhelming, and the general health and safety of communities were unlike anything I had ever seen,” says Chow.

Disposing of used needles properly, changing bed linens between patients and staff treating open wounds safely were some of the basic healthcare practices absent in the hospitals where Chow volunteered.

“It was hard to take in,” says Chow. “The doctors I worked with were passionate about treating their patients, but that passion was hindered by the lack of basic medical supplies that can be taken for granted in Canada.”

When he arrived home from Nepal, Chow began reaching out to contacts at hospitals and other charitable organizations. They were able to connect Chow with unused medical supplies, including thousands of gloves and masks discovered by a construction company during the demolition of a hospital wing in Hamilton — “pure gold,” says Chow, for the underprivileged hospitals he visited.

Chow’s network of Toronto hospital contacts has grown to include staff at SickKids, where he worked during the summer of 2018, and Mount Sinai. Together, Chow and his contacts have donated medical supplies for facilities in Ethiopia, Nepal, Zimbabwe and Cambodia. Thousands of N95 masks and gloves from Chow’s stockpile also went to Wuhan in early January with a Canadian doctor travelling to the outbreak’s epicenter to offer his assistance.

Though Chow founded Health Matters Worldwide, his parents and younger brother Aden actively participate in the organization. They help with donation pick-ups and stock the shelves in the basement of their family home, which has served as a supply warehouse for almost three years.

“They’ve been a big help,” says Chow. “I couldn’t do this without them.”

Chow continues to accept donations of masks, gloves, and other medical supplies, as well as financial donations, which are used to pay for shipping box and additional baggage fees charged to travellers delivering the goods.