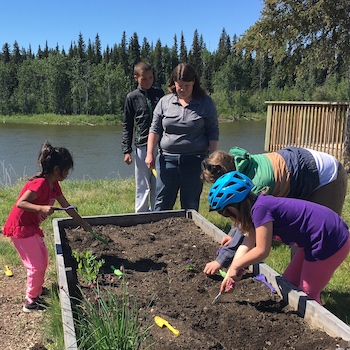 For people of the Ka'a'gee Tu First Nation in the tiny Northwest Territories community of Kakisa, eating isn’t just a matter of opening a fridge.

In Hay River, 80 minutes away, three bags of groceries cost about $300, according to Ka'a'gee Tu First Nation councillor Terry Simba. Groceries are cheaper in Yellowknife but the city is four and a half hours away. Traditional food is a major part of people’s diet but climate change is creating challenges to the access and availability of these foods. Forest fires in 2014 destroyed trails and changed where animals roam. Travel on the land is becoming more dangerous due to increasingly unpredictable weather.

In the face of these challenges, the people of Kakisa and several other Northwest Territories communities are working with Wilfrid Laurier University researchers on multiple projects to enhance northern food security in the face of rapid climate change.

“Communities have been coping with food security challenges for many years, including high food prices, the legacies of colonialism and impacts from the transition from the traditional food system to increased dependence on food from stores,” says Andrew Spring, adjunct professor of geography and environmental studies and associate director of Laurier’s Centre for Sustainable Food Systems. “Climate change is one more stressor contributing to food insecurity in a situation that’s already precarious.”

With climate change producing more unpredictable weather, people have set out to hunt or fish only to get stuck in storms or on unseasonably unsafe ice. Some have had to be rescued by helicopter, says Simba, who visited Laurier’s Waterloo campus earlier in 2019 for meetings with research partners.

Even the wildlife has changed. Salmon, deer and pelicans have been spotted in the Kakisa area for the first time.

“There are a lot of questions about how these new species affect the animals that people have relied on as their traditional food sources,” says Spring, who started working with the Ka'a'gee Tu First Nation in 2014.

“Climate change is really affecting us. There’s no snow when there should be. People are having to change when and where they hunt. Since we had the big forest fire in 2014, there’s less porcupine and muskrat around. We’re seeing so many changes.”

Forest fires burn hotter and faster than in the past, destroying deeper layers of soil and organic matter. What grows back after the fire may not be the same as what was there before.

Water temperatures have risen, so to avoid spoilage, fishing nets now have to be checked twice a day rather than once a day or a few times a week. This increases the time needed and cost of each catch.

“Climate change is really affecting us,” says Simba. “There’s no snow when there should be. People are having to change when and where they hunt. Since we had the big forest fire in 2014, there’s less porcupine and muskrat around. We’re seeing so many changes.”

While the rapidly heating climate is a negative development, it does present opportunities for adaptation. For example, some northern lands may become more suitable for agriculture.

The Ka’a’gee Tu First Nation is now researching these opportunities. With support from partners, notably Spring and his team of graduate students, it recently received a major federal grant for a project titled Northern Agricultural Futures.

“As part of the adaptation planning we did with the community, we asked, ‘How is climate change affecting you and what do you want to do about it?’” says Spring. “Kakisa was adamant about four things. They said, ‘We want you to engage our youth in all aspects of the research, we want to map and monitor the land, we want to recycle and we want to grow food.’ There are health benefits to fresh, locally produced food and the community wants to capitalize on those.”

“Agriculture has not been part of the food system in this area, so there’s little cultural history or experience of growing food.”

Warming temperature and soils result in faster nutrient cycling, which may support more productive growing environments for plants. However, the potential to grow food in the Northwest Territories depends on many factors, such as long-term human capacity, community and government support for agricultural initiatives and policies, and environmental factors including soil fertility and whether those soils will become wetter or drier with climate warming.

The Northern Agricultural Futures project will examine all these topics, building on previous Laurier-supported work that saw the development of a small-scale community garden in Kakisa.

“Agriculture has not been part of the food system in this area, so there’s little cultural history or experience of growing food,” says Spring. “If it has been introduced, it was typically through missionaries and residential schools so for some, negative memories still paint the issue today.”

How to Grow Food in the North

One possibility the project will investigate is building greenhouses, which could extend the growing season. Another is establishing outdoor farm fields, perhaps in fire breaks, where sections of forest are cleared to protect the community possible wildfires.

Researchers will use remote sensing techniques to examine soils and permafrost to determine which areas might be most suitable for agriculture as the climate continues to warm. Identifying these lands should help communities retain control over them in the future, says Spring.

“We want to do agriculture in a way that stores carbon, that works with the forest. It’s an approach called agroforestry or agroecology, which is all about taking care of the land, animals and people. It also fits in well with Indigenous food systems in the North.”

Another goal is to ensure that agriculture is in harmony with the boreal forest rather than destroying forests for the sake of agriculture. For that part of the project, Spring and the communities involved are working with researchers from the Laurier-led research project Food: Locally Embedded, Globally Engaged (FLEdGE), headed by Alison Blay-Palmer.

“We want to use agriculture not only as an adaptation tool but as a mitigation tool,” says Spring. “We want to do agriculture in a way that stores carbon, that works with the forest. It’s an approach called agroforestry or agroecology, which is all about taking care of the land, animals and people. It also fits in well with Indigenous food systems in the North.”

In addition to Kakisa, three other communities in the region, Enterprise, Sambaa K’e and K’atlodeeche First Nation, are involved in the Northern Agricultural Futures project. Other communities, such as Délįne and Yellowknife, are part of related Laurier-supported projects focusing on northern food security. Though there are points in common, each community determines its own direction.

“This is where academia is heading,” says Spring. “Increasingly, we fulfil a support role for communities, helping build capacity to do this work. We tackle community questions together.”

Spring is also researching policy issues that affect agriculture in the North.

“Ten years ago, very few people would have thought about growing food in the Northwest Territories, so there’s little policy in place,” says Spring. “Now there are people starting to grow food on a larger scale but it’s difficult to distribute and sell it. Different communities may choose to sell, trade or share – it’s really their decision.

“What we’re hoping to do is use our research to start the conversation about how the North can feed itself through identifying policy gaps and through increasing small-scale food production in ways that are culturally appropriate, directed by communities and that help protect fragile northern ecosystems.”