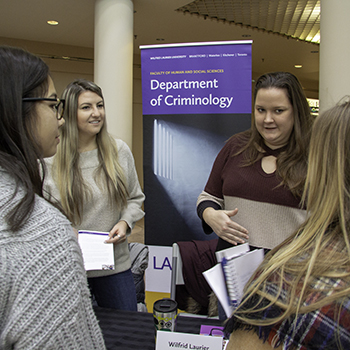 As Wilfrid Laurier University's Brantford campus celebrates its 20th anniversary, the Criminology department marks 15 years as a cornerstone program at the university.

In its early days, former Brantford campus Dean Leo Groarke was on a mission to find suitable programs that would complement existing offerings and help the campus grow. He found what proved to be a very viable option in Criminology, which was a fast-growing discipline for Canadian universities.

Thomas Fleming, a current Criminology professor at Laurier, was brought in to construct the program in 2003. As an interdisciplinary study of crime, Criminology fit well within the broader context of Laurier's Contemporary Studies program, which was designed to offer a modern and integrative approach to teaching the humanities.

"The vision was for a student-centred, interdisciplinary program that provided students with a solid foundation in criminology leading to careers in a variety of fields," says Fleming. "It was also important that it be an exciting experience for students that captured their imaginations."

"The research that comes out of our program tends to be very pragmatic in its approach, in that it's all quite grounded and interested in fostering social change. We take up these problems and study them, not just to publish, but to develop real-world implications and hopefully improve the system."

With course offerings such as Multiple Murder, Victimology, Outlaw Bikers, Forensic Investigation and more, the Criminology program caught students' attention, and the program grew from 80 students in its first year to nearly 1,000 entering the program in 2019.

Criminology as a stand-alone discipline is relatively new in Canada. Drawing from psychology, law, sociology and philosophy, criminology is a holistic look at crime and the way crime affects individuals, communities and societies, says Criminology Department Chair Stacey Hannem.

"One of the unique things about our department is that it's one of the few devoted Criminology programs in Canada," says Hannem.

Faculty members come from a range of backgrounds, allowing them to develop new courses based on their research. One example is Professor Ken Dowler's course, Gangsters, Goodfellas and Wiseguys: North American Perspectives of Organized Crime.

"The early period was an exciting adventure in building the program together," says Fleming. "We have outstanding faculty in many disciplines, and our offices were positioned so that we could benefit from a cross-pollination of ideas."

As the Criminology program expanded, there were more opportunities to offer innovative courses, like Public Criminology. The course, which was created by Associate Professor Carrie Sanders and Faculty of Human and Social Sciences Dean Lauren Eisler, was popular for both students and the public.

Classes ran once a week, and the first half of the three-hour lecture was open to the public. Dozens of internationally known criminologists and other experts came to campus to speak on their respective subjects.

"We weren't sure how many people would show up to our very first lecture. We knew that we had 28 people in the course, but we didn't know if the community would be interested," says Eisler. "We showed up with our scholar, University of Hawaii professor Meda Chesney Lind, and there were people lined up down the hallway to get in. It was absolutely packed."

Each week, 50 to 80 members of the public attended the class.

"Public Criminology was an incredibly innovative and creative opportunity, and probably my favourite memory from the last 15 years," says Eisler.

The department has grown from four faculty members in its first year to 16 in 2019, allowing a wide range of class offerings and providing faculty members with opportunities to explore new research topics.

"When one considers the cutting-edge research being conducted by our members across a wide range of criminological areas, it has led to national and international recognition of the excellence of the department," says Fleming.

For example, Hannem researches the impacts of the criminal justice system on the lives of marginalized persons, with a focus on sex workers in Canada. Associate Professors Debra Langan and Sanders are researching women in policing and recently led an international conference for women police officers. Assistant Professor James Popham is using data and interviews to measure the impact of Brantford's downtown outreach team, a pilot program that aims to connect those with addiction, mental health and housing challenges to support services. Assistant Professor Patrick Watson is examining the role of video evidence during criminal court proceedings with a police-involved shooting.

"The research that comes out of our program tends to be very pragmatic in its approach, in that it's all quite grounded and interested in fostering social change," says Hannem. "We take up these problems and study them, not just to publish, but to develop real-world implications and hopefully improve the system."

Over the years, the program has evolved to stay up to date with external, contemporary matters, like the age of the internet, as perennial forms of crime have migrated into the digital realm.

"We've also tried to identify the new and innovative areas in our discipline. We've evolved our programming to be very deliberate in looking at topics like digital and cybercrime because this is the new platform for victimization," says Hannem.

"I chose the Criminology program because it was one of the few programs where you jump in feet first in your first year."

While class sizes have grown, the program is still small enough for faculty and students to get to know each other. Also contributing to the program's sense of community is the Criminology Students' Association (CSA), created by students to increase opportunities for involvement in campus life.

The association has hosted several events, including one where political activist, author and former U.S. presidential candidate Ralph Nader delivered a lecture on corporate wrongdoing. The association, along with associate professor Dan Antonowicz, worked together to make the event free and open to the public, filling the 1,125-seat auditorium in the Sanderson Centre for the Performing Arts.

CSA also holds its Annual Criminology Student Conference, which celebrates student research, and a Criminology and Law Fair, which gives students the chance to network and connect with employers.

"I chose the Criminology program because it was one of the few programs where you jump in feet first in your first year," says Cheyanne Mulchinock, CSA president and fourth-year Criminology student. "I've made lifelong friends, built professional relationships with criminology staff and faculty, and I've always had such a great experience with my courses."

In 2011, Laurier launched the Master of Arts in Criminology program to allow students to further their education in the discipline. In 2015, Laurier offered a way for Criminology students to enhance their degree by earning a Bachelor of Arts degree and Bachelor of Laws degree through a partnership with the University of Sussex. There are also opportunities for students to take minors and options, like Psychology, Law and Society, Human Rights and Human Diversity and more, to expand their education.

"We want our students to not just graduate with degrees but to also graduate with an education and to feel like what they have learned they will take with them into the future, whether or not they work in the criminal justice system," says Hannem.

The Criminology Department just completed its second cyclical review of the program, allowing time for reflection on successes and challenges.

"As we celebrate our 15th anniversary, it is a good chance for us to reflect. I'm not sure we actually thought that we would end up with 1,000 students in the program, especially on a small campus, but here we are," says Eisler. "We've been successful, so how do we make sure we continue to be successful? It's more than the number of students you bring in; it's what you can bring to those students."