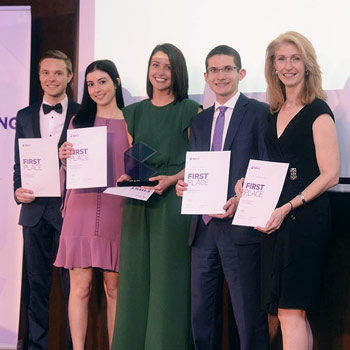 A team of students from Wilfrid Laurier University’s Lazaridis School of Business and Economics took first place at the Belgrade International Case Competition, held in April at the University of Belgrade in Serbia.

The Lazaridis School team was one of 20 top business schools to be invited to the annual competition. Melissa Donato, Matthew Donovan, Stephen Kingston and Kathryn Porretta spent countless hours researching and preparing for the competition, with support from Lazaridis School Associate Professor Sofy Carayannopoulos and instructor Srin Sridharan.

“I have been involved with the case program since September and it has been invaluable,” says Donato. “My communication and thinking skills have improved immensely. It’s a nice change from learning about theory.”

Poretta says preparing for the case competition was challenging but rewarding.

“It taught me how to use and apply business theories to the real-world scenarios companies face,” she says. “It pushed me to think outside the box and stay informed about the latest innovations. I also learned valuable lessons about working as a team.”

The competition featured three challenging cases that required teams to provide strategies for expanding news products in the market and identify industry verticals. The competition’s judges, mostly senior leaders in the industry, required rigorous proof of feasibility and a comprehensive strategy – requirements of real-world boardroom environments.

The judges commended the team on how comprehensive and insightful their solutions were, as well as the evidence they provided to demonstrate both value and feasibility. The team’s presentation skills and ability to confidently defend their recommendations under pressure also received high praise.

Donovan says the thorough judging added to the competition experience.

“The quantity and quality of the judges in attendance were impressive,” says Donovan. “They were well researched, well prepared and ready to ask tough questions in an attempt to poke holes in every team's solutions. This added to the level of difficulty but improved the calibre of the competition.”

The competition experience offered more than just tough cases. Organizers ensured that participants had the opportunity to learn about Serbia and Belgrade and broaden connections with students and faculty from around the world. Lazaridis students forged friendships with others from top international schools, while being exceptional ambassadors for Laurier.

“Case competitions are a great way to combine rigorous academic requirements with the ability to meet and get to know teams from around the world,” says Donovan. “I always love the wide range of cultures, languages and people at each competition. It is great to get to know both the students and faculty from universities around the globe.”

Donato, Donovan, Kingston and Porretta are also members of Laurier’s JDCC team, which was victorious at the JDCC 2019 competition in February, with multiple podium finishes. They also performed well at six other international competitions.

“Having the opportunity to represent Laurier internationally was an experience second to none,” says Kingston. “Taking home the win was absolutely incredible. It shows how strong Canadian schools like Laurier are and the impact of case competition programming.”