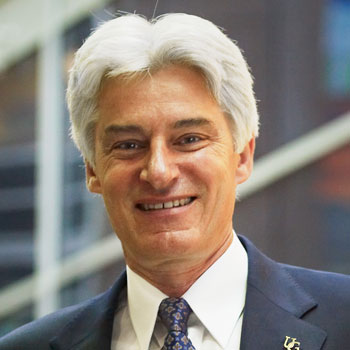 Wilfrid Laurier University has appointed Anthony Clarke to lead the Faculty of Science as its new dean, beginning Aug. 1, 2019. His term will last five years.

Clarke is currently a professor in the Department of Molecular and Cellular Biology at the University of Guelph. He has held a number of administrative roles at the University of Guelph since 1993, including as assistant vice-president of Graduate Studies and Program Quality Assurance; interim associate vice-president: academic; associate vice-president of research services; and interim dean of the College of Biological Science. He has also served on a number of administrative councils and committees.

“I am thrilled to welcome Dr. Clarke to the Laurier community,” says Robert Gordon, provost and vice-president: academic. “His leadership, grounded in research and administrative expertise, will be a tremendous benefit to the Faculty of Science as it continues to grow and develop.”

Besides his administrative roles, Clarke is also a renowned microbiologist and biochemist. In his time at Guelph, he established an inter-disciplinary research program, where he collaborated with colleagues across the country and around the world on ways to make antibiotic-resistant bacteria more vulnerable to drug treatment and to efficiently produce plant-based biofuels, among other goals.

“I am very much looking forward to serving Laurier as its dean of Science. Laurier is renowned for its strong sense of community and collegiality, attributes that I highly value and strive to foster,” says Clarke. “The Faculty of Science has grown significantly since its formation in 2000 and these are exciting times. I am honoured to be granted the opportunity to provide leadership as dean.”

Clarke will succeed Kenneth Maly, Laurier associate professor of chemistry and biochemistry, who has served as Laurier’s acting dean of science since July 2018.

“I would also like to take this opportunity to recognize Ken for his work as the acting dean of science, and express appreciation for the significant contributions that he has made over the past year,” says Gordon.