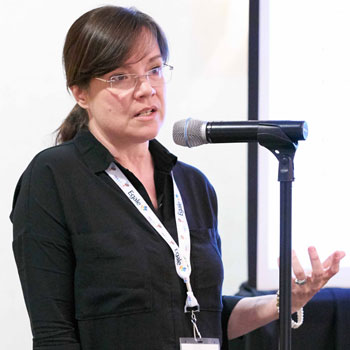 Professor Morgan Holmes is pushing for change for intersex people, through research and activism

Throughout her career, Laurier Sociology Professor Morgan Holmes has been advocating for intersex people – those born with chromosomal, hormonal or anatomical sex characteristics that fall outside the conventional classifications of male or female. For her, there is no distinction between her scholarly work and her activism. Instead, each informs the other.

Within the last 25 years, she has authored and co-authored many journal articles about issues affecting intersex people, written one book, Intersex: A perilous difference, and edited another, Critical Intersex. As Canada’s foremost scholar on the topic, she has been a consultant for government agencies and ministries, including the Department of Justice, Health Canada and the Public Health Agency of Canada, and is a volunteer advisor and representative for Egale Canada, an organization that works to improve the lives of LGBTQI2S people.

In Canada, most intersex people are diagnosed, then assigned a gender and treated surgically or pharmaceutically to match that gender, either at birth or later in childhood. Holmes and other activists argue that these treatments have lifelong and often detrimental effects on children and should be prohibited at least until the child has reached an age at which they can give informed consent or refuse as mature minors.

Medical conditions, most often congenital adrenal hyperplasia and androgen insensitivity syndrome, which affect sex hormones or the body’s reaction to those hormones, can lead to a person being born intersex. Some of these conditions can be life-threatening, but rarely because of the child’s sexual or reproductive anatomy. Still, depending on the surgeon and the hospital, parents are advised to have large clitorises reduced, small penises and testes removed, and internal testes removed, among other “normalizing” procedures.

“With clitoral reductions, if we're just talking about biological function, there’s really no good reason to not leave their bodies alone. It isn’t preventing someone from urinating,” says Holmes. “It’s not like with cleft lip, which is a cosmetic issue too, but can sometimes mean a child can’t eat or speak.”

The impacts of medicalization on infants and children can be long-lasting. Many are subjected to repeated surgeries and pelvic exams throughout their childhood. Some need to take hormone replacement drugs for the rest of their lives after functional gonads have been removed. Some eventually find the gender they identify with doesn’t match the sex they’ve been assigned. Some are sterilized in the process, a topic Holmes covered recently as a representative of Egale Canada at a Standing Senate Committee on Human Rights in Ottawa.

“The medical establishment is setting up a situation that frightens the parents, coerces their proxy consent, damages relationships of parents to children and denies them the opportunity to have healthier choices made over a longer period of consideration that allows for the child’s developing autonomy to come into play and give their own consent,” she said to the committee.

Holmes and other intersex activists have been calling for an amendment to a section of the Criminal Code, which prohibits female genital mutilation but allows surgery on infants and children “for the purpose of that person having … normal sexual appearance or function.”

“It’s exhausting to have a personal stake in it. It’s exhausting to participate in a movement that is based on testimony and requires people to re-narrate the issue over and over again. Testimony can be retraumatizing; it makes them personally vulnerable even if it accomplishes something.”

Her advocacy work helps take her research beyond academic publications. Last year, a 25-page academic document she wrote was used to inform the Office of the Privy Council’s LGBTQ apology. Another paper she wrote was submitted as part of Egale Canada’s Just Society Committee report in 2016.

In her academic work, Holmes has been trying to research the prevalence of surgeries on intersex infants and children, by requesting documentation from children’s hospitals, searching through hospital archives and filing Access to Information requests, but hospitals have not always been cooperative about sharing this data and her Access to Information requests have so far been rejected because they have been deemed “not of interest to the public.” She is now working with a pediatric nursing professor at the University of Northern British Columbia to gather data from the B.C. Children’s Hospital.

“For the CAH [congenital adrenal hyperplasia], AIS [androgen insensitivity syndrome], Klinefelter and Turner groups, our preliminary estimates show that 80 to 90 per cent are being terminated prenatally,” said Holmes. “These are not conditions that would warrant that kind of intervention. These are terminations happening for socially normative reasons and to allay parental distress over having an atypical child.”

Change has been slow, inside and outside of academia. A lack of general awareness and understanding about intersex has made her roles as an academic, advisor and activist challenging, since Holmes always has to start by explaining what intersex is before moving the discussion forward.

The intersex population is organizing and working together. In order to make change, however, intersex people must share their personal experiences, something Holmes has had to do over and over throughout her career.

“It’s exhausting to have a personal stake in it,” she says. “It’s exhausting to participate in a movement that is based on testimony and requires people to re-narrate the issue over and over again. Testimony can be retraumatizing; it makes them personally vulnerable even if it accomplishes something.”

Holmes has studied other topics, including food culture, health, social justice and the anthropology of medicine, but her work for intersex people has remained a constant throughout her career.

“Activist groups and colleagues have said, ‘Morgan, you got on the train in 1994 and started it up. We can see that it’s going to come to its destination before you die,’” she says. “I would like to work on other things, but I do have a sense of obligation to continue.”