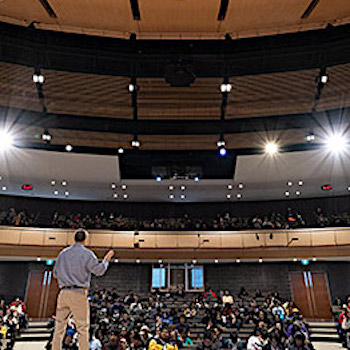 There is a buzz in Wilfrid Laurier University’s Lazaridis Hall auditorium as more than 500 students discuss, debate and respond to a question about market failure that Associate Professor Ken Jackson has posed to a first-year microeconomics class.

Once the answer is revealed onscreen, the students’ alternating high-fives and groans make it clear that their answers to his question were varied. Jackson uses touch-screen technology to work through the answer in real-time while answering questions about key concepts covered in the problem.

“Interactions with students keep me going – keep me engaged in my teaching,” says Jackson. “I tell students, ‘If it feels like we’re working together, class can be fun for all of us.’”

“He has been such a great encouragement and inspiration to me and so many other students. I think professors like Ken are why Laurier is No. 1 in student satisfaction.”

Jackson, an associate professor and associate chair in Laurier’s Department of Economics, teaches 1,822 undergraduate students from the Lazaridis School of Business and Economics as part of “Introduction to Microeconomics.” He also advises hundreds of students – most from within his department, but many from other disciplines – in his role as undergraduate economics program director.

“Dr. Jackson has allowed me to feel welcomed into the Laurier community,” says Matthias Chow, a first-year student in the Faculty of Arts. “Not only when he's delivering his excellent lectures and helping me understand difficult homework questions, but also when he’s helping me figure out my future path.”

Chow is in the process of considering his direction in academics and says he has sought Jackson’s guidance on many occasions.

The associate professor is uniquely qualified to provide advice to students, thanks to his varied classroom and career experiences. Jackson holds a BSc in Physical Geography, but also studied mathematics. He initially had his sights set on a career in physics, following in the footsteps of his nuclear physicist father. But after working as an aerial photographer in British Columbia for five years, he decided to pursue his PhD in Economics.

“For some students, I’ve been where they are and I can offer my advice to help find the best solution,” says Jackson. “I tell students to stop worrying about decisions that aren’t in front of them yet. When you’re worried about the end, it can impact your success in your studies. I ask them if they like what they’re doing now and, if not, what do they want to do?”

“Dr. Jackson has really contributed to expanding my knowledge about the subject of economics and he has me excited for my upcoming years in the program,” says Sarah Hutton, a student in the Department of Economics. “He has really helped me to take the concepts that are taught in first year and apply them further to real-world issues.”

Jackson finds success teaching a large class by considering the lecture as a performance. Engaging activities and current technologies are embedded in Jackson’s class, including iClickers, devices that allow students to respond to questions anonymously while letting instructors know if students are grasping the concepts being taught.

“I’m performing in front over 500 students three times a day,” says Jackson. “In some respects, the class needs to be entertaining. The feeling of knowing what they’re getting and what they might miss in class is the value of interactive course components.”

Encouraging participation in large classroom settings does come with one downside, however: “It is going to get loud – as it should,” says Jackson.

During the first week of class, Jackson outlines two of his ongoing goals: to ensure that students are learning and to make sure that their grades fairly reflect what they have learned. If students commit to the first goal and come to class with an openness to learning, Jackson says they can work together to achieve the second.

“He has been such a great encouragement and inspiration to me and so many other students,” says Hutton. “I think professors like Ken are why Laurier is No. 1 in student satisfaction.”