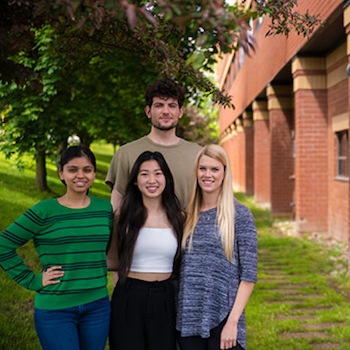 In partnership with the AIDS Committee of Cambridge, Kitchener, Waterloo and Area (ACCKWA), the group members conducted research on factors that affect the health of people living with HIV, including social isolation, stigma and access to services.

The project was one of three completed in 2018/19 for Applied Community Research (PS 492), a two-semester psychology course that pairs groups of senior undergraduate students with local organizations dedicated to social change and community well-being. The course is offered through the Centre for Community Research, Learning and Action (CCRLA) and is funded by the Laurier Students’ Public Interest Research Group (LSPIRG).

The group working with ACCKWA interviewed nine adults living with HIV/AIDS about their experiences with social inclusion and exclusion, food security and housing.

“Despite the stereotype that their life is over, a lot of the people living with HIV/AIDS are actually really positive and have a good outlook on life.”

The researchers were building off quantitative research from the previous year, but wanted to go beyond numbers to tell personal stories about people’s experiences in the HIV/AIDS community.

“When people think of research, they automatically think of publication or prestige, whereas I think of it as educating yourself and learning,” says Patel, who recently graduated from the Health Sciences program and is now applying to medical schools. “A lot of research looks at biological aspects of the situation and fails to look at the social, economic and political aspects.”

“One of the big findings is that individuals with HIV/AIDS, upon their diagnosis, did not receive good health and medical care [where they lived], so they were having to move cities in order to receive quality care,” says Briscoe, who will soon start a master’s degree in couple and family therapy. “This is something that hasn’t been talked about much.”

The student research team found misconceptions and stigma arose when people living with HIV/AIDS tried telling friends and family about their diagnosis.

“People talked about how, when they came out as HIV positive, they would lose friends,” said Gillis, who recently graduated with a Bachelor of Science in psychology. “However, some of their friends would come back as they educated themselves and became more aware.”

There are many misconceptions about HIV/AIDS, particularly the ways in which it can and can’t be transmitted and how it can be prevented, said the researchers. For instance, many people don’t know that two HIV-positive parents receiving effective treatment can have an HIV-negative baby or that there are medications available that prevent transmission between sexual partners.

Those misconceptions lead to the prevalence of stigma, even in the justice system, says Mountryvong, a new health sciences graduate.

“Not disclosing HIV-positive status to sexual partners is still criminalized in Canada under some circumstances, so there is a fear attached to it.”

“You’re working with a community partner and people are relying on you. This is about making an impact on the community.”

The student researchers did report some positive findings. One was that diagnosis led some interviewees to pay more attention to what they were eating and how they were treating their bodies.

“Despite the stereotype that their life is over, a lot of the people living with HIV/AIDS are actually really positive and have a good outlook on life,” says Briscoe.

Even though HIV/AIDS is a challenging chronic illness, some interviewees spoke about how it taught them to be resilient.

“It made me think about how I take my health for granted,” said Patel.

The team noted ways in which the community already supports people living with HIV/AIDS.

“One of the first things people did when they found out the diagnosis was they sought out some sort of support group where they could be around people who were going through something similar,” says Briscoe. “Our interviewees all found ACCKWA.”

However, the team found gaps where more resources are needed to provide access to healthy, affordable food. The students concluded more supports are needed at ACCKWA, which provides both health care and social services, to assist people living with HIV/AIDS – and that these organizations need enough funding to provide a broader range of supports.

This research will be used to create a community report that ACCKWA will use to educate the public and appeal for more government funding. Gillis and Mountryvong also plan to connect with local high school students to create an original video based on the findings of the research.

“You come out a whole different person,” says Patel.

“You’re working with a community partner and people are relying on you,” says Gillis. “This is about making an impact on the community.”