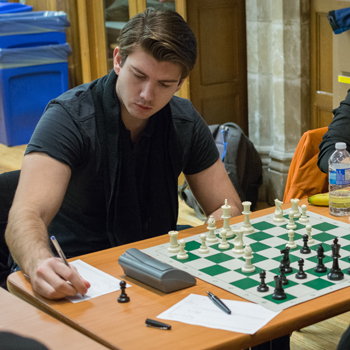 For the first time in its history, Laurier’s Chess Club will be hosting the Canadian University Chess Championship, which pits chess aficionados from universities across the country against each other.

The tournament will be held Jan. 18 and 19 in the Senate and Board Chamber and Paul Martin Centre on Laurier’s Waterloo campus.

Thirty-three teams from universities in Ontario, Quebec and Nova Scotia will be competing in the Championship (for those with a Canadian Federation of Chess rating of more than 1,800, calculated based on the player’s performance in past games) and Open leagues. Laurier has three teams participating.

“Hosting the 2020 Canadian University Chess Championship is an extraordinary honour,” says Hasan Shodiev, an instructor in the Department of Physics and Computer Science and one of four playing on Laurier’s Championship League team. “We are confident that we will put on a great and highly successful competition.”

Games will be held on Jan. 18 at 10 a.m., 2 p.m. and 6 p.m. and on Jan. 19 at 10 a.m. and 2 p.m. Games are timed and can run for a maximum of 75 minutes, with 30 seconds granted per move. The competition is free to watch and everyone is welcome, as long as they’re quiet and respectful. Some games will be livestreamed on the Chess Club’s website.

About the Chess Club

Laurier’s Chess Club hosts open games every week in the Concourse on the Waterloo campus. The club also hosts simultaneous chess games every semester. Professors, talented students and grand masters are invited to play multiple games at a time, walking from board to board in a set order. In the past, the club has invited international grandmaster Mark Bluvshtein and international master Natalia Khoudgarian, who has represented Canada at the Women's World Chess Championship and the Women’s Chess Olympiads and is a four-time winner of the Canadian Women's Championship. Vladimir Kitaev, professor in the Department of Chemistry and Biochemistry, has also played several simultaneous games.

The Laurier Chess Club is made up of more than 25 members from across disciplines, including professors and students studying business, philosophy, physics and chemistry.