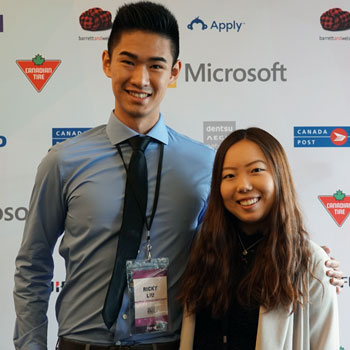 At the beginning of January, Canada’s Next Top Ad Exec, the largest marketing competition in the country, put out a call to marketing students, asking: How would they establish Microsoft as a leader in artificial intelligence among post-secondary students?

Students had only a few weeks to come up with an elevator pitch. The teams with the top 25 ideas would win $1,000 each and be asked to submit a full, 15-page marketing strategy. Of those, the top 10 teams would have a chance to present their ideas and rub elbows with industry professionals at an exclusive event in Toronto. The winning team would get $25,000.

Teams from 28 universities – 184 teams in total – submitted their ideas. Ricky Liu, a business administration student at Wilfrid Laurier University’s Lazaridis School of Business and Economics, and his teammate, Lily Liu, an accounting and finance student from the University of Waterloo, won $1,000 for their pitch and were selected as one of the top 10 teams to present to more than 20 senior leaders, including CEOs and CMOs, in Toronto on April 1.

“There was about 400 years of experience just sitting in front of us,” says Ricky. “It was a very scary moment, for sure, but, after you’ve done something like that, you’ll never be afraid of presenting again. It was a really great experience.”

The competition, in its 13th year, aims to bridge the gap between industry and academia by exchanging expertise, mentorship and career opportunities. For students, it’s an opportunity to apply what they’ve learned in the classroom to real-world problems. For companies, it’s become a way to find and recruit the next generation of talent; many executives come to the competition ready to offer internships and full-time jobs to promising up-and-comers.

“It was an invaluable networking opportunity to meet some of the best marketing leaders in the industry,” says Lily, who recently shifted career paths, from accounting to marketing, after taking a few marketing and supply chain management courses at Laurier. “Microsoft, McDonalds, Canadian Tire, PepsiCo, Snapchat, Canada Post – these are just some of the big names that were heavily involved in the competition, whether they hosted workshops or sponsored the event.”

Ricky and Lily worked for months on their pitch. They surveyed more than 130 students and found that, for more than 80% of respondents, communicating across cultures and languages is an area they particularly struggle with. It was also something both Ricky and Lily had faced themselves. Lily had gone on exchange to Sweden in 2017 and Ricky was on exchange in Hong Kong during the three months the two worked on their marketing strategy.

“International student enrolment continues to increase at Canadian universities and so we saw a big opportunity, especially in the classroom, where collaboration, group projects and teamwork are necessary,” says Ricky. “Many people experience difficulties in that situation, with language barriers and communication challenges. Artificial intelligence could be part of a solution.”

Rather than trying to design technology to solve the problem, such as a Star Trek-esque universal translator, their task was to market an idea in an innovative and creative way, using market research. They used the skills they had learned in the classroom to prepare a budget, feasibility report and promotional strategies.

The finalists were invited to Toronto in advance of their presentations for four days of workshops and presentations from industry professionals and former competition winners. Ricky and Lily even met with staff from Microsoft and received feedback and suggestions on their idea, which they were able to incorporate into their presentation.

While they didn’t claim the top prize, Ricky and Lily were thrilled to have been involved in the competition and are encouraging other Laurier marketing students to get involved next year. Both are graduating this year and have full-time jobs in their chosen fields lined up.

“It was so rewarding to see our entire idea come to life, from seed level to execution, and present that to executives,” says Lily. “Even though it was really nerve-wracking, it was great to see them all in one room just listening to your idea because of how impactful the solution could be.”