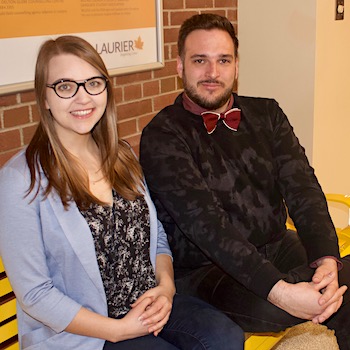 People living with mental health and/or addiction issues increasingly have the option of receiving support from someone who has been through similar experiences. New Wilfrid Laurier University research, the Peer support Outcomes at Work Research (POWeR) project, will examine the effectiveness of peer support on occupational recovery for people with mental health and addictions challenges in the workplace.

“There are so many workers living with mental health and addiction issues, whether they’re related to the workplace environment or to personal issues, that are impacting their functioning, productivity and well-being,” says Simon Coulombe, an assistant professor of psychology who is leading the research with master’s student Kendra Hardy. “It has so much social and economic impact – it’s really a crisis that needs to be addressed.”

The project received $168,000 in funding from the Workplace Safety and Insurance Board’s (WSIB’s) grants program – the largest grant Laurier has ever received from the organization – and is being conducted in partnership with seven peer support organizations in Ontario and an advisory committee composed of peer support stakeholders and scientific experts.

What is Peer Support?

The basic premise of peer support is that someone who has lived experience of a mental health or addiction issue and is managing recovery well is uniquely positioned to help someone else through a similar issue. Although successful volunteer-based programs exist, many peer support workers are now trained and paid for their work.

Workplace-focused peer support programs vary widely. Some focus on workers within one industry while others rely on clinical or community organizations that help people from a variety of occupations. Sometimes peer support is the main form of intervention; sometimes it complements other supports. Peer support can be provided one-on-one or in a small-group setting. Regardless of format, peer support can relieve pressure on the health-care system.

“But even beyond the economic savings, peer support has great potential to promote hope, empowerment and more of the personal aspects of recovery,” says Coulombe.

Coulombe has researched peer support programs more generally, but says research focused on occupational outcomes has been limited to date, even though peer support is increasingly being integrated into workplace wellness programs.

Through the POWeR project, Coulombe, Hardy and co-investigator Sophie Meunier of Université du Québec à Montréal aim to recruit 300 participants who are just beginning peer support programs. They will assess their well-being before they begin the program, 12 weeks later, when most programs are concluding, and another 12 weeks after that.

“There are so many workers living with mental health and addiction issues ... It’s really a crisis that needs to be addressed.” ~Simon Coulombe

The researchers will compare how peer support participants fare on measures such as how long their leaves are and their wages upon return to work compared to demographically similar people who have been receiving WSIB benefits for mental-health leaves but have not participated in peer support programs.

“Another goal is to put an economic estimate on the effect of peer support,” says Coulombe. “We plan to translate any differences between our study group and the artificial control group into economic indicators, which is rarely done.”

The researchers also plan to provide fact sheets for employers, a policy brief and videos in which people who have received or offered peer support share their experiences.

As the project coordinator, Hardy, who is in the second year of the community psychology master’s program, has played a major part in putting together the research proposal, developing survey questions, spearheading ethics approval, liaising with community partners and coordinating logistics.

“I’m very interested in translating research into actionable policy. I want to take the skills I’ve learned here and apply them to create change.” ~Kendra Hardy

Hardy is also involved with the Thriving on Campus study focusing on LGBTQ+ students and the  Laurier Centre for Community Research, Learning and Action’s Flourishing Communities Research Group, in addition to a part-time role as a policy analyst for the Public Health Agency of Canada, which arose from a summer position in Ottawa. Recently, she won the participants’ choice award in the Three Minute Thesis competition at Laurier.

“Kendra has been doing so many exciting academic and professional projects over the last two years,” says Coulombe. “She has developed a very broad knowledge of different psychosocial issues as well as different methodologies. She’s definitely going to continue contributing a lot as she advances in her career.”

Hardy plans to stay involved in the two-year project in a reduced capacity even once she finishes her studies in August and lands a full-time job.

“I’m very interested in translating research into actionable policy,” says Hardy. “I want to take the skills I’ve learned here and apply them to create change.”