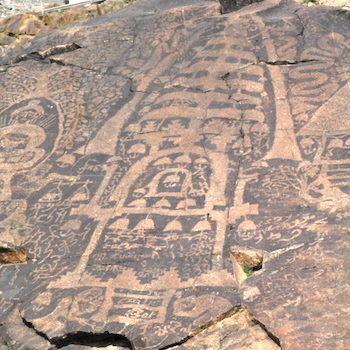 Deep in the river valleys of northern Pakistan, along a winding highway, lie thousands of ancient rock drawings, inscriptions, and what could be described as travellers’ graffiti.

Though they go mostly ignored by drivers on the road, the inscriptions and drawings date back millennia and offer a unique glimpse into a long-ago world of international travel along what was once part of the Silk Road.

Now Laurier researchers, along with colleagues from the Royal Ontario Museum, Pakistan and Europe, are working to document and preserve these invaluable drawings using the latest in modern-day technology.

Wilfrid Laurier University Religion and Culture Associate Professor Jason Neelis, who specializes in South Asian religions and history, particularly the inscriptions and manuscripts of the ancient Gandhara region of modern Pakistan and Afghanistan, has been fascinated with these drawings for years.

This past spring, he co-led a team that conducted field work along the Upper Indus River, where dozens of sites with carvings are clustered.

Working with Neelis were Ryan Anningson, who graduated from Laurier’s Religious Studies PhD program and served as a postdoctoral research assistant, and Joshua Graf, a master’s student in Laurier’s Religion, Culture, and Global Justice program, who assisted with digital mapping.

The team focused on an area near Shatial bridge, which served for centuries as a key crossroads for merchants, pilgrims, missionaries and other travellers. Here, over a thousand inscriptions are carved into the nearby boulders and cliff faces, written in early Indian and Iranian writing systems, as well as in Chinese.

On many of the boulders are intricate drawings dating back to a period between the 3rd and 7th centuries AD, when Buddhism was the dominant religion of the area. The Buddhist drawings are mostly images of Buddhist domed structures called stupas, while others depict bodhisattvas and scenes from the Buddha’s previous births. 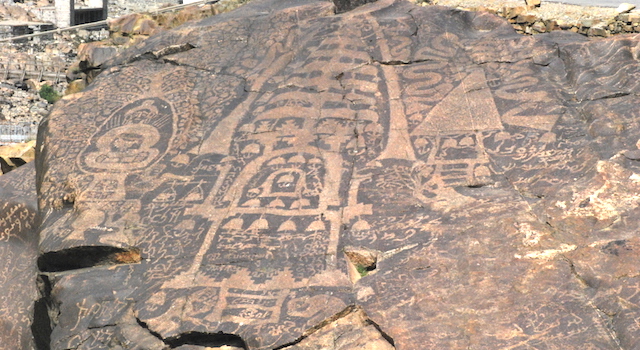 Some of the petroglyphs date back even further in time, depicting prehistoric hunting scenes with ibex, markhor (screw horn goat) and mountain goat drawings. Others were simple inscriptions to mark a merchant’s journey, like an ancient form of graffiti.

“This whole area is rich in written and cultural heritage that helps us to learn not only about the local inhabitants and their belief systems, cultural affiliations, and religious practices, but it also tells a vivid story about the visitors to this area,” Neelis says.

The carvings have managed to endure for millennia in the high mountain desert climate, but recently, these invaluable pieces have come under threat.

There are plans to build a massive hydroelectric dam along the river to help relieve Pakistan’s electricity shortage. If the dam is built, it would create a massive reservoir that could put many of the upstream sites with petroglyphs and inscriptions underwater.

With that in mind, Neelis and his collaborators in the Computer Science Department at the Lahore University of Management Sciences (LUMS) have been working to try to document the network of Upper Indus sites, in partnership with members of the Directorate of Archaeology and Museums for Khyber-Pakhtunkhwa (DOAM-KP). Members of French research institute Archéologies et Sciences de l'Antiquité (ArScAn) also contributed.

“Many of these sites would be in the projected flood zone if the dam is constructed. For that reason, it is imperative for us to process and preserve these images and do whatever we can do to make that material accessible and understandable to a wider audience,” he says. 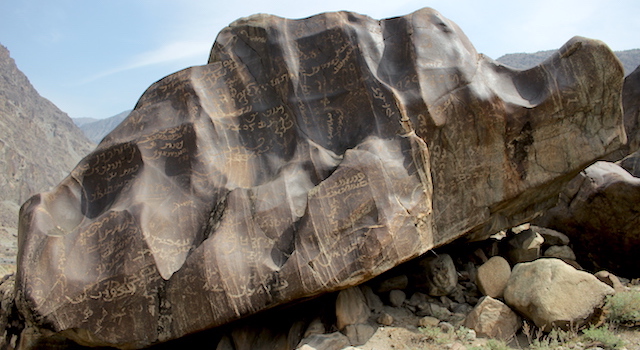 A team of experts from the Heidelberg Academy of Humanities and Science in Germany, formerly led by the renowned archaeologist Harald Hauptmann, began the documentation work in the mid-1980s. Though researchers from Heidelberg were able to thoroughly document many sites with inscriptions and petroglyphs, they were only able to publish hand drawings of most of the petroglyphs.

Hauptmann died earlier this year and Neelis and his team have been eagerly continuing his work using digital technology, with funding assistance from a Social Sciences and Humanities Research Council of Canada (SSHRC) Partnership Development grant.

“We want to carry out his legacy and fill in the gaps of research, using the latest techniques of digital imaging and mapping,” Neelis says.

One technique they’ve employed is called photogrammetry. By taking multiple photos from various angles around each boulder, they can use software to merge the photos together to create a rich, composite 3D image.

The team has been working with 3D scanning to develop a more comprehensive understanding of the features and texture of each rock that simple 2D photos could never reveal. They’ve also employed drone-mounted cameras to get bird’s-eye images of clusters of carved boulders, synching the images with GPS data to map out each area in precise detail. 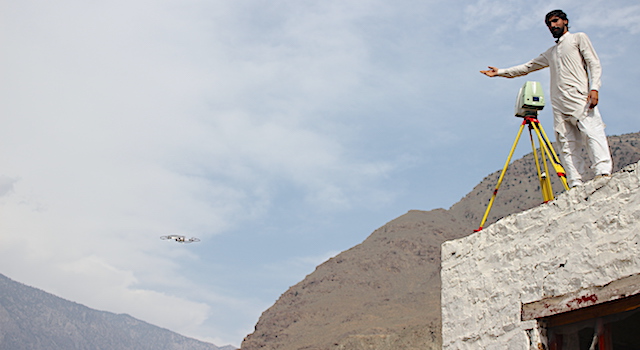 Neelis’s hope is that his team’s work will facilitate wider access to these remote and rugged sites, and help promote the unique cultural heritage of the region.

“Some people ask me if these inscriptions are directions to find gold in these hills. I tell them no, it’s more like travellers’ graffiti,” he says. “But what I realize now is: there is gold in these rocks. These sites could become the key to promoting the local cultural heritage.”

Co-directors of the project are Murtaza Taj of Lahore University of Management Sciences (LUMS) and Laurianne Bruneau of École Pratique des Hautes Études (France). Amjad Ali Mughal of LUMS (pictured above) is a key collaborator.