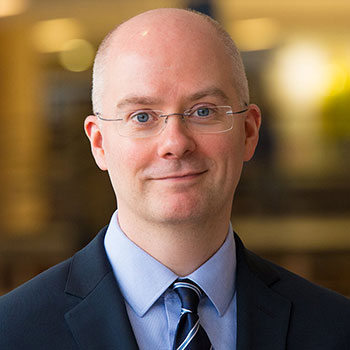 Good news! You’ve landed a student internship at the Brantford Bugle and you start today. The only journalism experience you’ve had to date comes from in-class studies so you know you are going to face a significant learning curve. But you’ll get the hang of this job soon, right?

In an 11-part interactive video series developed by Bruce Gillespie, associate professor and program coordinator in the Digital Media and Journalism (DMJ) program, students follow the journey of Frankie, an aspiring journalist studying in the DMJ program embarking on her first-ever internship.

The on-the-job scenarios created by Gillespie are scripted, but they were developed to reflect the realities of the modern North American newsroom.

“I took what could have been considered an ‘out there’ idea and created a ‘choose-your-own-adventure’ game for students to connect in-class theory to real workplace scenarios,” says Gillespie, who is also Laurier’s 2017 Teaching Fellowship recipient.

The interactive video-and-game modules were developed for the introductory News Writing and Reporting course, which is mandatory for first-year DMJ students and offered as an elective for students in other programs. Students in the fall 2018 term are the first cohort to take part in the new course component.

“The best part of this process was working one-on-one with students in DMJ as well as in the Game Design and Development program, to conceptualize the story, film the videos and create the interactive, online games.”

Each episode is a personal video journal entry shot by Frankie, the fictional intern. She recaps her week of activities and issues at her internship. A few videos are filmed at the imaginary Brantford Bugle, where viewers get the chance to meet some of Frankie’s colleagues – usually when they are adding new tasks to her plate. At the end of each video, students are asked to continue the narrative in a game, playing along as Frankie and deciding how to react to on-the-job crises and ethical issues during the corresponding week of her internship.

In the second week of her internship, for example, Frankie’s colleague Josh asks her to conduct some community interviews to help him complete a story he’s working on. The catch? The story is due in two hours. Should she head straight out to interview residents, read through Josh’s notes in the hopes of finding something valuable, or call Josh to get some clarification?

Once students choose a path, they are asked a series of follow-up questions that challenge them to apply the best practices they’ve learned in class to the situation at hand. Students are always granted the chance to try again by starting at the beginning of the path if their choices result in an unfavourable outcome. These exercises are not graded, providing students with a low-stakes environment to explore the challenges and rewards of working in the fast-paced media industry.

The course focuses on major themes, such as:

All of these critical concepts are addressed in both obvious and indirect ways during Frankie’s time at the Bugle.

“Watching the videos, you can easily put yourself in Frankie’s shoes and I think that is such a fun way to learn the concepts and make them memorable.”

In Gillespie’s opinion, novels, movies and television shows often portray journalists as morally bankrupt in an effort to make plotlines more appealing, so he has moved away from using these forms of media in his courses. Since he couldn’t find an engaging and accurate form of media to bring complex course concepts to life, he made his own.

“After reviewing the literature, it seems the use of interactive video as a teaching tool is a relatively new approach,” says Gillespie. “The best part of this process was working one-on-one with students in DMJ as well as in the Game Design and Development program, to conceptualize the story, film the videos and create the interactive, online games.”

Recent DMJ graduate Chandler Berardi (BA ’18) plays the leading role of Frankie during the series. While the Brantford Bugle may be a fictitious news organization, Berardi didn’t feel like the scenes were far from the realities students face in the classroom and in the workplace.

“I was never an intern during my time at Laurier, but I could definitely relate to Frankie and how she was feeling,” says Berardi. “The idea of working at a daily newspaper with tight deadlines, writing multiple stories a day, copyediting and taking my own photos and visual content, on top of being a student, absolutely terrified me!”

Berardi believes that the process of “choosing your own adventure” through the series will have a great impact on students’ interest and understanding of the course material.

“It just shows you how much Bruce cares about his students and how much he wants them to not only succeed in but also enjoy his class,” says Berardi. “Watching the videos, you can easily put yourself in Frankie’s shoes and I think that is such a fun way to learn the concepts and make them memorable.”

“I’m inspired by the rate of change in this industry. What works one year may not work the next, and keeping up with these trends helps me transfer new learning to my teaching practice.”

Prior to his role as associate professor and program coordinator for DMJ, Gillespie worked in Toronto as a freelancer writer and magazine writer and editor for more than 10 years. During this time, he began teaching part time at Ryerson. In 2010, Gillespie applied for an open position on Laurier’s Brantford campus and felt equal parts excitement and nerves when he was hired.

“I knew this professional program and others like it had a mix of practitioners and scholars, but I also knew classroom management and public presentations were areas I wanted to work on,” says Gillespie.

Soon after starting at Laurier, Gillespie realized that his years of experience working with and mentoring young writers in the newsroom resulted in a professionalized set of teaching skills that could be applied in the classroom.

To continue his teaching development, he became actively involved with workshops led by Teaching and Learning at Laurier. It wasn’t long until Gillespie began running his own communities of practice for instructors in Brantford.

“I’m inspired by the rate of change in this industry,” says Gillespie. “What works one year may not work the next, and keeping up with these trends helps me transfer new learning to my teaching practice. I really like to try things I’ve never done before.”

Berardi’s reflections on her experience with Gillespie’s project echo the importance of lifelong learning – regardless of the role you’re playing.

“It’s so important to keep trying new things,” says Berardi. “Never let yourself get too comfortable, because then you’ll stop learning about yourself and you will never really know what you’re capable of.”