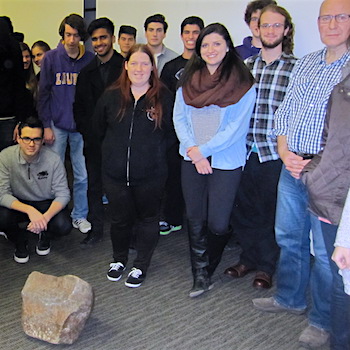 Scientists have solved some of the mysteries of the universe and will solve more in the future. Many questions, however, remain open – and some always will.

That’s the well-informed opinion of Wilfrid Laurier University astrophysicist Ioannis Haranas and what’s behind the inquiring but never know-it-all attitude he brings to his physics and astronomy classes, including Planetary and Space Science, the third-year course the adjunct professor has taught for the last three years.

The course covers topics including gravitation, comets, asteroids, celestial mechanics and planetary structure. As an elective course open to any Faculty of Science student, Haranas shows the students some “heavy math” but doesn’t test them on it. The course concentrates on concepts, both at the far ends of the universe and close up. Sometimes close enough to touch.

One highlight of the course is the chance to inspect a meteorite Haranas has on long-term loan from a friend. At nearly 100 kg in mass – the weight of a large man, despite being only the size of a beach ball – it’s not easy to bring to class. But it’s worth it to see the wonder on the faces of the students when they get up close to a chondrite type B meteorite that hurtled through space and fell to Earth, landing in the Moroccan desert 500 to 5,000 years ago.

“It’s the same age as the solar system, 4.5 billion years,” says Haranas. “You can see that part of it exploded in the atmosphere; the rest of it fell. From the friction with the atmosphere, it’s all glazed, because the surface layer melts. You can see the waves of the molten material going sideways.”

“When I was five or six, I wanted to shoot a rocket up. I found a tin bottle or something, made a hole in the wall, put the thing on top and set fire to it. My mother came because she thought I was setting the place on fire. But she didn’t stop me.”

Haranas has been fascinated by physics and astronomy since he was a child growing up in Greece.

“When I was five or six, I wanted to shoot a rocket up,” he says. “I found a tin bottle or something, made a hole in the wall, put the thing on top and set fire to it. My mother came because she thought I was setting the place on fire. But she didn’t stop me. She said, ‘How are you going to shoot it up? You have no engines.’ I said, ‘The fire will shoot it up.’ So she helped me light the fire. She never stopped me from any science.”

Though that particular experiment was a failure, the parental encouragement lit a fire within Haranas as well. In addition to a BSc in applied mathematics, he has two master’s degrees – one in solid state physics, the other in astronomy and astrophysics, which he followed up with a doctorate in planetary and space science.

Haranas has never stopped experimenting and he encourages his students to do applied work as well. For instance, he leads the class in a simulation to calculate what would happen in Waterloo if a large meteorite fell in Lake Ontario – would it result in an earthquake, sonic boom or even a tsunami?

However, Haranas says not too worry too much about meteorite strikes, especially not ones on the scale of the one scientists believe led to the extinction of the dinosaurs. The chances are astronomically low – literally.

“There are basic, fundamental theorems in science that prohibit us from knowing everything.”

But though Haranas is quite certain his grandchildren’s grandchildren will survive Earth’s journey through space, he readily admits he doesn’t know the answers to a lot of questions about the universe – such as where it came from.

It’s not that Haranas wants to discourage his students from seeking answers, far from it. But there are limits to science and human knowledge, he says.

Haranas says humans will never travel to other stars, never mind other galaxies. Given current rocket propulsion technologies, it would take about six months to get to Mars – a highly perilous journey. Mars is only about 13 light minutes from Earth, which illustrates how far we are from achieving light-speed travel. The closest stars are about four and a half light years away. The Andromeda galaxy is more than two million light years away.

“If you try to accelerate something close to the speed of light, the mass of the body becomes infinite. So how are you going to move something that requires infinite force to move it? How can we define an infinite force, anyway?”

“If you try to accelerate something close to the speed of light, the mass of the body becomes infinite. So how are you going to move something that requires infinite force to move it?”

Even if somehow humans were ever to achieve speed-of-light travel, we would then face problems such as time running differently at different points relative to each other, says Haranas. For instance, if it took a 20-year-old nine years, as seen from Earth, to travel to the nearest star and back, he or she would not be exactly 29 upon return.

“The nine years of Earth time will not be the same for astronauts moving at the speed of light,” says Haranas.

Connor Martz (BSc ’17) was enthusiastic to sign up for the course in 2017 after having taken the more basic first-year astronomy courses.

“While this course involves a lot more complicated theories and concepts, the payoff in unlocking the secrets of the universe is well worth the challenge,” says Martz, now a master’s student in astrophysics. “Dr. Haranas’s passion and guidance were instrumental in my success during my BSc at Laurier and continue to be during my MSc at the University of Waterloo.”

Quynh Diem Dao, who is starting her fourth year in physics in September, says that among other things, the course deepened her understanding of Einstein’s theory of general relativity.

“Dr. Haranas is a very friendly, approachable, and interactive professor, which allowed for a fun, interactive learning environment,” says Dao. “He made it easy to grasp even hard concepts.”

Cameron Naraine, who will graduate with a BSc in physics in June, calls Haranas an “excellent professor” and his courses fascinating.

“The content I learned in Planetary and Space Science helped me gain a greater appreciation of the universe as a whole and taught me that even the smallest of details within it are pivotal to the bigger picture,” says Naraine. “I keep my eyes to the night sky and gaze in astonishment at what lies there and beyond.”