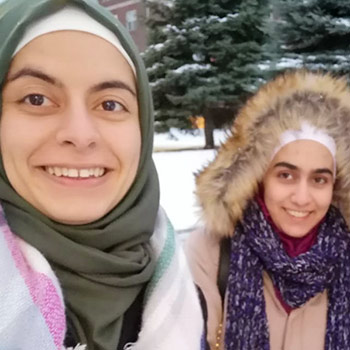 Like most Wilfrid Laurier University students, Bushra Jbawi and Aphrodite Al Zouhouri are happy to be finished with final exams and are looking forward to the 2019 school term. But these students have something to else celebrate – the successful completion of their first term at Laurier as international students overcoming war.

Jbawi and Al Zouhouri are two of three new graduate students from Syria studying at Laurier with support from International Students Overcoming War (ISOW), a student-led group at the university that provides scholarships to international students whose lives have been disrupted by violence in their homeland. ISOW partners with Jusoor Syria, a non-governmental organization dedicated to connecting Syrian youth with post-secondary scholarships abroad. ISOW welcomed their first group of international scholars to Laurier in September 2015.

“ISOW has received such broad support from the university community that we now have 14 ISOW scholars studying at Laurier’s Waterloo campus,” says Gavin Brockett, ISOW faculty liaison and associate professor of History and Religion & Culture. “All of Laurier can be proud of the extent and depth of learning that the sponsored scholars and student leaders have put forth as a result of the ISOW initiative.”

Conflict Too Close to Home

Jbawi completed a bachelor’s degree in information technology engineering at the University of Damascus in 2016 and dreamed of pursuing graduate studies abroad. Although was crippling Syria, the decision to leave was still for one for Jbawi to make, as it would be filled with many firsts.

“I had only left Syria once before and that was to take an exam in Lebanon,” says Jbawi. “Leaving my family, going on an airplane and coming to Canada were all new experiences for me.”

Jusoor, which matches scholarship applicants with programs at partner universities, identified Laurier’s Master of Applied Computing program as a fit for Jbawi’s academic interests in areas like artificial intelligence. She arrived at Laurier’s Waterloo campus in late August and quickly settled into her studies.

To familiarize herself with Canadian culture and meet more people on campus, Jbawi participated in the intercultural certificate offered through Laurier International. The certificate supports students, both domestic and international, in the development of intercultural skills, knowledge attitudes to strengthen their abilities to support and understand a globally diverse world.

“The certificate helped me get used to life in Canada,” says Jbawi. “I’ve learned about the culture, made some new friends and improved my English.”

Her experience in Canada to date has been short, but it’s already made a significant impact.

“Being at Laurier has allowed me to learn from others, to learn about other cultures and to accept them as I feel I have been accepted,” says Jbawi.

Al Zouhouri was in her last year of high school when the fighting broke out near her home in Qusyr, Syria in 2011. She planned on studying computer engineering at Al-Baath University in the city of Homs; instead, she was living as a refugee in Lebanon with her educational dreams on hold.

Although her own education was interrupted, Al Zouhouri realized she could help younger Syrian students in the community to continue learning.

“I worked with other students my age to teach the younger children,” says Al Zourhouri. “We were not trained teachers but we knew we could help them with reading and writing.”

During her four years in Lebanon, Al Zourhouri and her peers-turned-colleagues operated their own school. They developed a curriculum and held classes in their homes. In 2012, Al Zouhouri and her team had 14 students; by 2016, they had over 400, prompting a local non-government organization to let the group use classroom space in a Lebanese school in the afternoons.

Teaching Syrian children had a profound impact on Al Zouhouri’s education. Instead of computer engineering, she turned her degree aspirations to . She completed a degree in English as a Second Language in Lebanon in 2016.

Al Zouhouri is studying in Laurier’s Master of Education program. Her goal is to work with refugee youth, as she is familiar with the traumas they have experienced and the challenges yet to come.

“These children are too young to process what has gone on,” says Al Zourhouri. “On top of being displaced, there are language and cultural barriers. I know how they feel.”

Al Zouhouri is taking courses on trauma and the refugee experience, leadership, and mental health issues in the classroom as part of her program. She says the support from her classmates, many of them seasoned educators, has been instrumental to her success thus far.

“They encourage me to speak and share my ideas,” says Al Zourhouri. “It is such a different experience compared to when I was a student in Lebanon; I didn’t feel welcome there. But here, I feel welcome and I can learn in a stress-free way.”

Like Jbawi, her roommate, Al Zouhouri participates in activities. She is also an active participant in the Education Graduate Students’ Association and is helping to plan the group’s annual winter conference.

“I am part of this community now and I am looking forward to how I can contribute.”