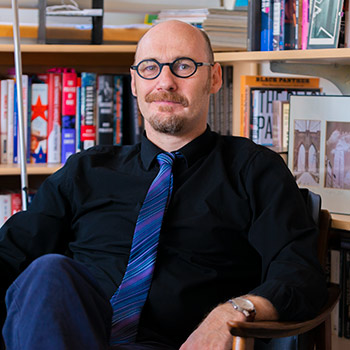 If you picture the radical right as white supremacists marching with tiki torches, they’re easy to dismiss as members of the lunatic fringe. However, in a new book, Wilfrid Laurier University Professor and Chair of History Darren Mulloy makes the case that since the Great Depression, the radical right has had a major influence on mainstream politics in the United States.

Mulloy’s book, Enemies of the State: The Radical Right in America from FDR to Trump, is at least as much about the Republican Party as it is about fringe groups such as American fascists and militias.

“When Donald Trump was elected, lots of people had questions about how it was that this billionaire political outsider was suddenly in the White House. But the Trump presidency doesn’t come out of nowhere,” says Mulloy. “It comes out of a long history of right-wing groups in the United States.”

The radical right has been historically associated with conspiracy theories, demagoguery, extreme language and overt racism. Some of those features, however, have crossed into the mainstream over the years, particularly lately, says Mulloy.

“In many respects, the Republican Party has actually become the radical right.”

Opposition to the New Deal

Mulloy’s book starts in the aftermath of the Great Depression. Until then, the government hadn’t been a major part of most people’s everyday lives. That changed under President Franklin D. Roosevelt’s New Deal, enacted in the 1930s to get the economy moving again.

The New Deal introduced massive public works spending and welfare measures that had social and racial implications. As Mulloy chronicles, one conservative organization, the American Liberty League, came into existence after a former vice-president of the Du Pont corporation complained about a group of “negroes” who had refused work, “saying they had easy jobs with the government.”

Since that time, both the radical and mainstream right have pushed to curtail taxation, regulation and “big government,” says Mulloy.

Anti-Communism and the Civil Rights Backlash

During the 1950s, Senator Joseph McCarthy led far-reaching investigations into supposed communists in government, Hollywood and other high echelons of society.

It was arguably the beginning of pervasive conspiracy thinking. This thinking bled into popular culture, evident in tales of alien abduction cover-ups starting in the 1950s, the X-Files show in the 1990s, and right-wing media such as the Alex Jones Show today.

“There’s something empowering about feeling you have access to secret knowledge, especially if you feel yourself to be downtrodden,” says Mulloy. “In a world of increasing complexity, conspiracy theories provide a simple answer.”

The civil rights movement also arose in the 1950s. White racists opposed it and the Ku Klux Klan enjoyed an oft-violent resurgence. Nonetheless, the movement achieved successes, notably with the passage of the Civil Rights Act in 1964.

“Overt racism became unacceptable in political discourse, so what arose was a coded form of racism, what’s called dog whistle politics, in which you speak to white racial anxieties but don’t use racialized language,” says Mulloy.

Examples are references to “states’ rights,” which harks back to the secessionism of the Civil War, and 1980s Republican President Ronald Reagan’s talk of “welfare queens,” widely understood to be black.

From Reagan to the Tea Party

The Reagan era was a time when the Christian right grew politically powerful. Televangelists such as Pat Robertson and Jim Bakker gained influence by appealing to “family values,” arguably an anti-feminist, homophobic dog whistle. Robertson even campaigned to become the Republican presidential nominee in 1988.

When Democrat Bill Clinton became president in the 1990s, members of the right demonized him and worked to get him impeached. Some radicals joined right-wing militias. White supremacist Timothy McVeigh, who blew up a federal building in Oklahoma City in 1995, killing 168, was a militia sympathizer.

Militia activity died down somewhat after McVeigh’s execution in 2001 but Mulloy’s book notes a second wave arose with the “Great Recession” of the late 2000s and the election of Barack Obama as the first black U.S. president. Some militias were associated with the hard-right, anti-government Tea Party movement that began around the same time.

The Tea Party made an effort to appear grassroots, and to some extent it was – many sympathizers were people who “felt cut out of economic success,” says Mulloy. However, some argue the Tea Party was an “Astroturf” movement powered by billionaire ultraconservatives such as the Koch brothers. Either way, Mulloy says, the movement laid the groundwork for the election of Donald Trump.

Understanding the Rise of Trump

When Trump was elected in 2016, it wasn’t immediately clear if it was a triumph for the radical right. In some ways, Trump, a former pro-choice Democrat who insisted during his campaign he would protect social security and Medicare, didn’t fit with its traditional script.

In office, however, surrounded by advisors such as Steve Bannon, Trump tried to repeal the Affordable Care Act and changed his tune on abortion. His major first-year achievement was a massive tax cut. He has moved to reduce bureaucracy and regulations, notably environmental ones.

“What are being enacted are policies that are consistently favourable to the radical right,” says Mulloy. “Steve Bannon, before he left the White House, said the goal was the dismantling of the administrative state.”

Big money has had big influence over the Trump White House. Billionaires such as Bob and Rebekah Mercer helped get him elected. Trump’s cabinet is the wealthiest ever assembled. Underlying this is the 2010 Supreme Court decision that corporations can spend unlimited money on political campaigns, says Mulloy.

Social media and right-wing media such as Breitbart have allowed for radical views and misinformation to spread widely, often unchallenged within people’s social media bubbles.

“The conspiracy beliefs, paranoia and extreme language that used to be hallmarks of fringe groups are increasingly evident in mainstream American politics,” says Mulloy. “There used to be moderate Republicans but now they fear they’ll be primaried out of their own party if they’re not sufficiently conservative.”

The crux of Mulloy’s book is that there are historical reasons for all this – none of it came out of nowhere. As a historian, Mulloy is reluctant to predict the future. However, he says the radical right has become so powerful, it will be difficult to curtail its influence.

“It’s about economics but also cultural politics and racial identity, the idea of ‘taking America back,’” says Mulloy. “We’re in a period of great uncertainty and it’ll be fascinating to see what happens next.”