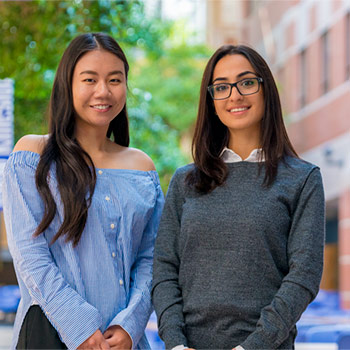 Life in Waterloo Region still isn’t easy for people who are lesbian, gay, bisexual, transgender, queer, or otherwise don’t fit into society’s traditional norms of gender and sexual orientation (LGBTQ+). That’s one of the conclusions of a large study conducted by researchers from Wilfrid Laurier University and a coalition of community organizations.

Two Laurier undergraduate students who worked on the study and recently played a leading role in producing the study’s first fact sheet, “Victimization and Community Safety Among LGBTQ People in Waterloo Region,” say the study shows how much work there still is to do to make communities truly inclusive.

“Over 90 per cent of people heard growing up that being lesbian, gay, bisexual or transgender was not normal, which is very sad,” said Sara Ashtiani, a fifth-year student in biology and psychology.

“Ninety-two per cent of the respondents said they’d pretended to be heterosexual and 86 per cent of trans folks have tried to pass as non-trans, so these are very high numbers,” said Kathy Luu, a fourth-year health sciences student.

A Large and Wide-Ranging Survey

The OutLook Study is the first to comprehensively survey the needs of the LGBTQ+ community in Waterloo Region and one of the largest such studies done to date in Canada.

From May to November 2016, the study team conducted an online survey and 526 people participated. The respondents were people 16 and over who identified as LGBTQ+. Of those, 57 per cent were aged under 30 and 21 per cent identified as transgender.

The survey touched on many issues, including violence, discrimination, sense of community belonging, intimate partner violence, coming out, social support, access to health care, and safe and avoided spaces.

For Luu, some of the most striking results lay in the responses from transgender people.

“Transgender folks experience more victimization and discrimination compared to cisgender folks, including physical violence, intimidation and threats, sexual assault, verbal harassment and silent harassment, which was very eye-opening,” says Luu, who is cisgender (identifies with the sex assigned at birth) and straight (heterosexual).

“It’s very important for individuals in the community who are straight and cisgender to realize that LGBTQ communities face these problems in Waterloo,” says Ashtiani, who identifies as a cisgender gay woman. “These are probably people that you pass by every day who have experienced horrible things right here in the region.”

Laurier is making strides in improving accessibility for transgender people on campus. The Brantford campus and Faculty of Social Work in Kitchener have installed gender-neutral washroom signs and there are plans to do the same on the Waterloo campus, which is also exploring other ways of improving trans inclusivity. However, there is still a ways to go, say the students.

Ashtiani has herself felt the lack of safe space in the region. She has experienced stares and cold glances – what the study terms silent harassment – when she holds hands with her girlfriend in public. She often doesn’t feel safe. However, continuing to do it is important to her.

“I feel like every time I hold her hand, it’s a statement I’m making,” she says. “I’m obviously still afraid but I will never let go of her hand just to make someone else feel comfortable.”

Ashtiani is now doing her honours thesis on the history and importance of gay- positive social spaces, based on the Outlook survey data.

“I’m hoping people in Waterloo Region will realize there’s not much space here that is available for LGBTQ+ people,” she says. “We had a bar here called The Order that closed down over the summer and it was the only one. We need spaces for people to be who they are and feel safe, socialize and meet people. It’s so important to have a sense of community belonging and not feel isolated.”

Laurier faculty members who have been working on the study are Robb Travers (the project’s principal investigator), Todd Coleman, Simon Coulombe, Ciann Wilson and Michael Woodford. Travers was Luu’s primary supervisor while Wilson was Ashtiani’s. Tristen Moyaert, another health sciences student, also worked on the fact sheet.  The students received directed studies credit for their work.

A number of other Laurier students, both undergraduate and graduate, have also been working on different aspects of the project. There are plans for other groups to produce more fact sheets as survey results are analyzed.

“It’s been an incredible opportunity for us as faculty to have students involved in helping to mobilize data from the OutLook Study,” said Travers. “Their commitment has been exemplary.   They are the future change makers and to see them so engaged in helping to meet the needs of local LGBTQ communities is both heartwarming and encouraging.”

Both Ashtiani and Luu say they learned a lot about the process of doing research and working with community partners. They say they felt mentored and supported by the faculty members and graduate students they worked with.

“It’s very nice to have people there to help you develop and grow as a person, and develop your voice in the community,” says Luu. “It’s been amazing to work with them.”