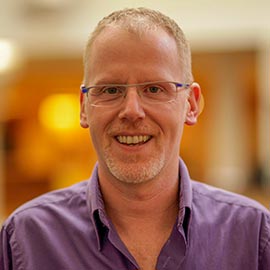 Wilfrid Laurier University Social Work Associate Professor Michael Woodford would like you to take a minute to imagine being a trans* person applying for university.

First, a word about words. Trans*, the term Woodford and many other scholars prefer, is a term referring to people who are transgender and those who identify as being outside the male/female gender binary – people who may describe themselves as genderqueer, gender fluid, agender, third gender or two-spirit. Though not all people who use these and similar terms identify as trans*, the asterisk is intended to indicate inclusiveness, says Woodford.1

“Cisgender,” meanwhile, describes people who identify with the gender associated with their sex assigned at birth.

Suppose in your university application form, you have to tick “M” or “F” – which do you choose if you don’t identify as either? Or suppose you are transgender, identify as a woman and can’t afford a single room but the university’s housing policies don’t allow you to have a female roommate?

Once you begin university, where do you go to the bathroom if you get suspicious looks no matter which room you choose, or if the only single-person washroom is across campus? How do you react when you go to the student health clinic and the nurse insists on calling you by your birth name or the clinic provides only health information appropriate for cisgender bodies?

These are real situations facing trans* students, as Woodford and his colleagues know after having conducted some of the most extensive research ever done on lesbian, gay, bisexual, transgender and queer (LGBTQ) students across the United States.

“It’s not just about going to the bathroom. It’s about recognition, inclusion and full participation in the academic process.”

Woodford was part of a team that, in 2013, surveyed more than 900 LGBTQ university students and interviewed 60 individuals to learn more about their experiences. A recently published paper from the study focuses on trans* students’ experiences with the issues outlined above – systemic discrimination facing trans* individuals on campuses.

School is stressful for all students. But chronic stressors for trans* people, such as worrying about being harassed in the bathroom, which box to tick, or accessing appropriate student housing or adequate health care can affect students’ sense of belonging on campus, their ability to concentrate on their coursework, and their physical and mental health, says Woodford.

“If a trans* student feels they do not belong on campus and has to put a lot of energy into figuring out where they can go to the bathroom, they may not have the same energy to put into other, more important things,” says Woodford. “It’s not just about going to the bathroom. It’s about recognition, inclusion and full participation in the academic process.”

There have been recent anti-trans* policy changes in the United States, such as the Trump administration’s revocation of guidelines that instructed schools to allow students to use the bathroom corresponding with their gender identity, as well as a multitude of proposals, mostly at the state level, to restrict access to everything from bathrooms to genital reconstruction surgery. These are adding additional challenges, says Woodford.

“It’s one thing when you’re invisible and feel excluded. It’s another thing when policies are actively marginalizing you,” says Woodford. “With some of these anti-LGBTQ proposals, they’re actually institutionalizing discrimination.”

Though there is still work to be done, Laurier is making strides on improving inclusivity for trans* students, says Woodford.

Laurier’s Brantford campus has already installed gender-neutral signs on all single-person bathrooms, as has the Lyle S. Hallman Faculty of Social Work in Kitchener. There are plans to do the same on the Waterloo campus.

Laurier’s Department of Residence is following the lead of the Ontario University Application Centre in using gender identity categories including a non-gender-conforming option. Laurier residence staff are in the early stages of developing a plan for non-binary individuals and have consulted with other Ontario universities that offer gender-neutral housing.

At the Student Wellness Centres on both campuses, in partnership with the Diversity and Equity Office, staff are currently reviewing opportunities to enhance health and wellness support specifically for minoritized students, including trans* students.

Both the Waterloo and Brantford campuses have student-run services under the umbrella of the Diversity and Equity Office that offer collections of academic, community and informational resources and referral services, as well as opportunities to actively engage in advocacy and awareness campaigns. The Centre for Women and Trans People (Waterloo), Laurier Brantford Women’s Centre, Rainbow Centre (Waterloo) and Queer Sphere (Brantford) actively welcome and support trans* students.

Woodford would additionally like to see forms, surveys and institutional records across Laurier and elsewhere include non-binary gender options, including allowing people to specify the pronouns they use and to change their birth names on institutional documents.

Also, to make the broader climate more trans* inclusive, he would like to see more awareness programs and curriculum that challenges transphobia and promotes allyhood.

“One thing we often hear is that we’re talking about such a small percentage of the population. That thinking is problematic because we shouldn’t be making policy just based on the number of people affected. We should be thinking about policy in terms of those outcomes we desire,” says Woodford. With regards to university students, that means, “we want students to come here, learn as much as possible and not face systemic barriers that interfere with their learning.”


1 Some consider using the asterisk unnecessary and problematic. On Laurier’s Waterloo campus, the Centre for Women and Trans People discontinued using the asterisk a few years ago. This article, because it is about Woodford’s research, uses the term of his choice.