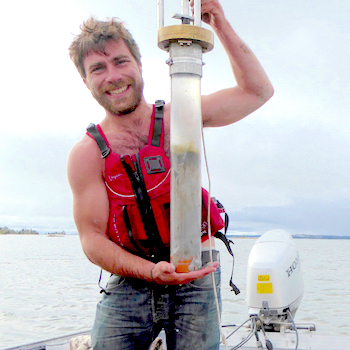 Water permeates the lives of the Tłįchǫ. In their traditional lands between Great Slave Lake and Great Bear Lake in the Northwest Territories, they use the lakes and rivers, summer and winter, as fishing grounds and transportation routes. Now a Laurier-led team is helping the Tłįchǫ ensure their water stays safe and clean.

James Telford, a second-year Master of Science student in the joint University of Waterloo-Laurier Graduate Program in Geography, is leading research to analyze aquatic sediment within the Marian River Watershed. He is working under the supervision of Laurier Professor Brent Wolfe and co-supervisor Professor Roland Hall of the University of Waterloo.

Telford’s work, which won him a prestigious 2016 W. Garfield Weston Award for Northern Research, will establish baseline conditions for an aquatic ecosystem monitoring program being set up by the Tłįchǫ Government. The monitoring program is designed to keep track of climate change effects as well as effects from a mine expected to open within the next few years.

Telford has been passionate about water since he was a kid growing up in Brantford, regularly canoeing on the Grand River and visiting the Great Lakes. He fell in love with the North while doing his undergraduate work, also at Laurier under Wolfe. His undergraduate thesis research took him to Wapusk National Park in northern Manitoba.

The “fantastic” relationship with Wolfe and the “really unique opportunity” of a project involving both science and work with the Tłįchǫ Government were what convinced him to stay at Laurier for his master’s degree. Hall has also become a great mentor, says Telford.

“They really care about their students and their research. It’s a very positive balance,” says Telford. “I can go see either of them anytime and they’ve been very supportive, giving me opportunities and encouragement.”

The Changes Elders Have Seen

Telford started his work in September 2015 and first went to Behchokǫ̀, the largest of the four Tłįchǫ communities, the same month. He is going again in time for World Water Day 2017, for a total of seven trips – and counting. From the beginning, he loved both the land and the people.

“The Tłįchǫ are incredibly generous – with hospitality, food, knowledge and just kindness,” says Telford. “When we go out onto the Tłįchǫ Lands to do fieldwork, they look after me in a way that’s really incredible.”

The land looked pristine – and cold. However, Telford soon started hearing stories from elders about how much things had changed.

Throughout watersheds in the North, water levels have been dropping due to a decrease in snowmelt runoff and an increase in evaporation due to climate change.

“When we went upriver, we had to portage over waterfalls and large rapids and the elders would tell me you never used to have to portage; you could just drive your boat right up.”

Telford heard that for the same reason, the water taxis that formerly connected the tightly-knit communities haven’t run in years. When he looked at the markings on rocks at the edges of the waterways, he could see how much water levels had dropped.

Mining Has Already Had Effects

Climate change isn’t the only threat to the watershed. There has been extensive mining in the region for decades – including uranium mines and the now-defunct Giant Mine gold mine, one of the most contaminated industrial sites in Canada.

Mining is an important source of income and employment for the Tłįchǫ. However, fishing is also important, culturally and as a source of food, so the Tłįchǫ are highly interested in ensuring their water and fish stay safe.

Now a new mine has been approved – including by the Tłįchǫ Government – to open in the south-central region of the Marian River Watershed. The Nico mine, to be operated by Fortune Minerals, will produce cobalt, gold, bismuth and copper. It will be a fairly large operation that presents some additional challenges compared to currently operating mines, says Telford.

“There’s more potential for pollution from this kind of mining, especially arsenic pollution, because the ore body is comprised of heavy metals like arsenic which can be liberated by the mining process itself.”

Arsenic is a human carcinogen that can build up in the bodies of fish and other animals.

Telford’s work focuses largely on figuring out what the area’s waterways were like before any industrial activity. This involves taking core samples of sediment from the bottoms of lakes.

“Even before the mine has started, we see major evidence of pollution from previous mining activities,” says Telford.

Despite the pollution in the sediment, so far, analysis of water and fish – the latter done by a biologist – shows the water is currently safe to drink and the fish is safe to eat, says Telford. The monitoring program is meant to ensure things stay that way.

Telford is still a year from completing his master’s degree – not unusual with a project of this level of complexity – but he hopes he will continue to be able to work with the monitoring program even once he’s finished his studies, whether through employment, a future PhD, or both.

No matter what, Telford’s work is “a great example of effective environmental science research in which the objectives were defined by a Northern community,” says Wolfe. “The legacy of his research will be its long-lasting application.”

Telford is grateful for the chance he has had to pursue “really beneficial science establishing support for the monitoring program,” he says.