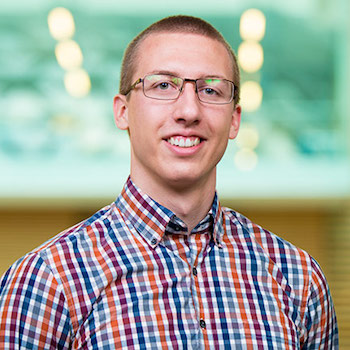 If you start a company, chances are you’re going to create a website with an “our team” or similarly named page, featuring smiling faces and bios. Pages like this put a human face on the company. But is that always a good thing? Laurier student Peter Fisher isn’t so sure.

Fisher is a PhD candidate in Management at the Lazaridis School of Business and Economics, concentrating on Organizational Behaviour and Human Resource Management. This year, the Human Resources Research Institute (HRRI) named the master’s project he completed for his MSc in Management the best in Canada. This marks the fourth time since 2011 that a Laurier student has won the HRRI Best Master's Thesis award.

For his project, completed under Professor Chet Robie, who is still his supervisor now, Fisher found that all-male teams displayed on websites resulted in an advantage for certain male job candidates.

“In STEM [science, technology, engineering and math] fields, the tech startup fields, a lot of companies have teams that are just men,” says Fisher. “The hypothesis was that when women are exploring these companies looking for potential future employers, they’ll look at the website and see an all-male or mostly male team and perhaps that will undermine their performance in the selection procedure.”

Fisher first became involved in researching gender in the workplace when he worked with Assistant Professor Ivona Hideg as a senior undergraduate student, also at Laurier. Hideg remains a mentor and an important influence, says Fisher.

“I guess growing up as an upper-middle-class white male, I didn’t recognize there were as many societal problems as there are. I remember reading about it and realizing a lot of these inequalities are really pervasive – it was a wakeup call,” he says. “I thought, ‘I can’t sit by and expect others to do something because if everyone takes that stance, nothing will change.’”

The Effects of Stereotypes

Fisher set up his experiment by using the website of a friend’s startup, changing its name and details and altering the “our team” page using fake names and stock photos. The company was billed as a finance startup, a male-dominated field familiar to students of the Lazaridis School. Research participants were randomly selected to see a website featuring an all-male team, an all-female team, or no team page at all.

The nearly 300 Laurier students who fully participated in the study were first given a test to measure their self-monitoring skills. Two weeks later, they were given time to peruse the website immediately prior to writing a general cognitive test as part of a recruitment process. Although study participants were aware there was no real job on the line, they were told the highest performers would be given $20, which motivated them to do their best. (Those who received the money were actually selected randomly.)

At first glance, Fisher didn’t see a gender-based performance differential. But when he looked at the self-monitoring scores, he found some surprising results.

Men who had high self-monitoring skills did “much better” in the cognitive ability tests when shown an all-male team, says Fisher. However, there was no difference in performance when they saw an all-female team or no team.

Women participants who had high self-monitoring skills did better when shown an all-female team page but did not perform better than their male counterparts. There was no significant difference in their performance when they were shown an all-male team or no team.

Among those with low self-monitoring scores, neither male nor female participants showed significant performance differences regardless of what team, if any, they saw. Fisher hypothesizes that this was because these participants were less likely to pick up on the team composition.

Implications of “Our Team” Pages

Because in real life, there are few all-female teams in STEM fields, “this could be a factor influencing the continued male dominance in these fields,” says Fisher. “When men see an all-male team, they recognize that there’s a stereotype that men perform better in this field, so they relax a little and are better able to perform without second-guessing themselves or thinking, ‘Maybe it’s a trick question.’”

Does this research mean that to achieve a better gender balance, companies should eliminate “our team” pages? Fisher says it’s too soon to make a definitive recommendation. He’s now planning to experiment with different team compositions to take his research further.

However, “STEM startups need to recognize that there could be negative effects from something as innocuous as putting your team on your website,” Fisher says. “In tech culture, people aren’t very conscious that gender inequity exists. If even one tech startup looks at themselves and says, ‘Maybe we need to change the way we recruit people,’ then that’s a good thing."

“Peter’s research on stereotype threat/lift is highly relevant to the workplace today,” says Robie. “His research was of very high quality, especially for a student at his level. This award validates all the hard work he has put into the program so far.”