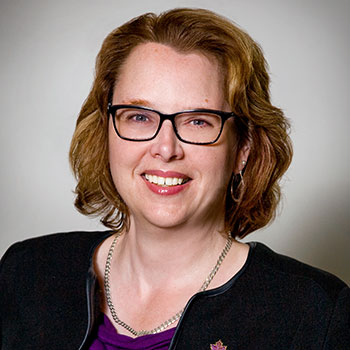 Deborah MacLatchy has begun her new role as president and vice-chancellor of Wilfrid Laurier University. She succeeds Max Blouw, who completed his second five-year term on June 30.

MacLatchy is Laurier’s seventh president and vice-chancellor since the university became a public institution in 1973.

“I am tremendously excited by the opportunity and privilege of leading this outstanding university,” said MacLatchy. “Laurier has a very bright future and I look forward to working with everyone in the Laurier community — students, faculty, staff, alumni, partners, donors and friends — as we continue to build on the university’s reputation for teaching, research, student experience, graduate programming, and diversity and inclusivity.”

A distinguished biologist with extensive experience in research, teaching and administration, MacLatchy served as dean of Laurier’s Faculty of Science from 2007 to 2009 and as provost and vice-president: academic from 2009 until 2017. Previously, she spent 13 years at the University of New Brunswick where she was dean of Science, Applied Science and Engineering, and director of the university’s International Office. MacLatchy holds an honours BSc from Acadia University and a PhD in zoology from the University of Manitoba. She is a founding fellow and past chair of the science directors of the Canadian Rivers Institute, and is a past-president and council member of the Canadian Society of Zoologists.

She has been recognized for her many achievements with a number of significant awards, including an honorary doctorate from Acadia University in 2016 and the 2015 Recognition Award from the Senior Women Academic Administrators of Canada. As well, she was named one of Canada’s Most Powerful Women for 2012 in a Top 100 list compiled by the Women’s Executive Network.