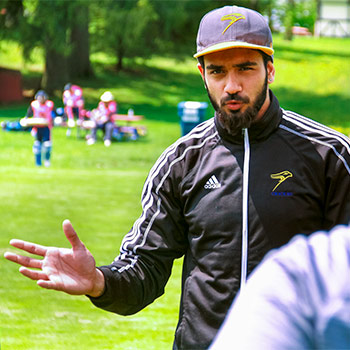 They say it takes a village to raise a child.

Laurier student-athlete Muhammad Abdul Rehman Naeem says it took an entire community, with on- and off-campus support, to build Laurier’s first-ever cricket program. It’s that same community that Naeem and Laurier’s student-cricketers are giving back to with true Golden Hawk pride.

Community has been at the heart of Laurier’s cricket program since its launch in May 2014, and Naeem credits Waterloo’s local club, Sunrise Cricket, for supporting the team’s early beginnings.

“We were very excited to play in Waterloo’s local league, Sunrise Cricket, at Waterloo Park’s cricket ground,” says Naeem. “Being able to play hardball cricket so close to campus and avoid travel to the Toronto area for matches was a huge bonus.”

Upon arriving to the Waterloo campus ahead of the fall 2013 term, Naeem was surprised to find Laurier students playing improvised matches of hardball cricket in empty campus parking lots.

Growing up in Lahore, Pakistan, cricket was as common to Naeem as hockey is to many Canadian youth. Given the global popularity of twenty-twenty (T20) cricket, a condensed version of the game, and Laurier’s strong athletic reputation, the future Golden Hawk simply assumed his university would have a cricket program in place.

Cricket, in its traditional hardball form, has been played in Waterloo for over a hundred years by local clubs, but the game hadn’t garnered much interest from the city’s university student demographic.

“It was really exciting to have such an enthusiastic group of student athletes join our league,” says Parveen Sharma, founder of Waterloo’s Sunrise Cricket Club. “They had energy, skill and passion for the game – something we love to see in the next generation of cricketers.”

Local restaurateur and cricket buff Abdullah Lawendy, impressed with Laurier’s student-cricketers, offered to sponsor the team and outfit them with jerseys.

“If we were getting support from people in the community, I was confident we could get support from the university,” says Naeem.

There wasn’t a shortage of support – or interest – for Naeem’s idea to bring cricket to the Waterloo campus.

In May 2014, he registered the Laurier Cricket Club (LCC) as a sanctioned sports club through Laurier’s Athletics department and worked with Athletics staff to secure authentic cricket equipment from renowned sporting goods supplier MB Malik International in Pakistan.

Naeem and two early club members began promoting the club on campus, and recruited more than 40 students and community members to play with the LCC. By the fall 2014 term, Naeem had enough interest to move forward with an indoor form of cricket called tape ball that could run throughout the fall and winter months. Four co-ed teams with a mix of domestic and international students faced off Sunday nights on the Waterloo campus.

“Diversity is a big thing for me,” says Naeem. “Cricket has ties to so many countries and cultures; it’s a great way to bring people together.”

“Naeem’s passion for inter-university play was the catalyst to grow the sport,” says Peter Baxter, director of Laurier Athletics and Recreation. “With this, Laurier was able to lead the expansion of university cricket across the province.”

Passionate about connecting with people through cricket, Naeem involved himself and LCC members in community initiatives on and off Laurier’s Waterloo campus.

Naeem and three hardball teammates participated in the #NotMyLaurier video campaign, a student-run initiative that aims to end gendered violence on campus.

“As a student-athlete, I feel very strongly about spreading awareness about the issue of gendered violence and sexual assault, which often can go unnoticed or become normalized,” says Naeem. “This campaign was a great way to change the conversation and dispel myths around this issue.”

The four student-cricketers and other students from the Waterloo campus took part in panel discussions and workshops to educate the campus community on forms of gendered violence, healthy masculinities and allyship.

Sharing their excitement for their favourite professional teams, the LCC regularly screens live International Cricket Council matches at the campus restaurant, Wilf’s. On June 18, more than 100 student fans rose early to watch the 5:30 a.m. live broadcast of the 2017 ICC championship match between India and Pakistan.

“The love for the game is certainly here,” says Naeem.

In an effort to inspire a love for cricket early on, Naeem and LCC members lead cricket clinics during the Golden Hawks’ multi-sport summer camps for children offered by Laurier Athletics, and are planning to offer future clinics in local high schools.

Balancing the workload as a student in the Lazaridis School's double-degree Business Administration (Laurier) and Math (University of Waterloo) program with his passion for cricket has been intense but not impossible.

“If you have a passion and love for anything, you can do it here at Laurier,” says Naeem. “The support is here to make you successful.”

Naeem’s efforts to establish cricket at Laurier’s Waterloo campus community was rewarded with an extension to his Centennial Scholarship, granted by then-university President and Vice-Chancellor, Max Blouw.

As his Golden Hawk career begins to wind down, Naeem will look to Laurier’s junior cricketers to keep the club’s momentum going and community growing. He’d like to see cricket established at the Brantford campus, and is confident that the Ontario University Athletics (OUA) will one day recognize cricket as an official varsity sport. Twelve colleges and universities in Southern Ontario have cricket programs in place, adding strength to Naeem’s hope for an eventual OUA status.