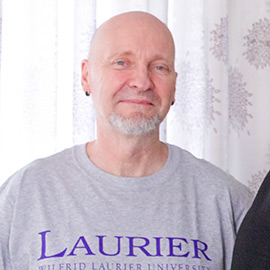 Are you curious about teaching or studying abroad?

Wilfrid Laurier University instructor Carl Simpson has one piece of advice: go for it!

He knew the opportunity would be unlike anything he had experienced so far — and that teaching in West Africa would be greatly different than in Canada. Adventure is what enticed him.

“The university advertised for a full-time position — my partner and I thought it would be a fun opportunity to explore,” he says. “Trying to set realistic expectations, the department chair kept trying to scare me away before I arrived, but I kept telling her, ‘you haven’t yet.’”

During his time in Legon, which is located just outside of the capital Accra, Simpson taught epistemology and the philosophy of science, while supervising masters students and doctoral student Husein Keyinde Inusah.

“The experience in Ghana changed me,” says Simpson. “You have certain preconceptions about the way societies work — or you think they won’t work if there’s corruption. And of course, in a country like Ghana that has a high level of corruption, you see society works just fine. It’s interesting to experience.”

“When I was an undergrad, I don’t remember there being opportunities to study abroad. But travel is pretty easy. You can always manage to figure things out.”

Simpson, who thinks international travel is too important an experience to miss, has lived and taught abroad before. In 2008, he and his partner moved to Cambodia, and before that he had been going to Cuba for several years to share ideas with faculty and students at the University of Holguin. He also arranged for a small group of Laurier faculty to participate in a conference at the same university.

He knows, then, the importance of cultural context when teaching abroad. In the classes he taught in Ghana, he drew upon scholarship and perspectives from Africa.

“Many philosophical debates in class deal with ‘others’ and differences between how the world is parsed up based on language,” says Simpson. “In Ghana, I was teaching in a context that used a lot of examples from the continent, though I’m not from Africa. It’s really intriguing to teach in that context. My colleagues were really good about supplying me with readings by African philosophers.”

While in Ghana, Simpson and a German professor co-taught a course on the aesthetics of music using a mix of Western and Ghanaian literature.

“The author of one of the Ghanaian texts we used is a professor emeritus who lived in Accra,” he says. “We took our students to his place, where we discussed and debated in his backyard. It was a real treat that brought together several perspectives — both student and teacher.”

Simpson, who in 2013 co-edited A Celebration of Philosophy & Classics with colleagues at the University of Ghana, was most recently in Ghana in December 2015 for his graduate student, Inusah’s thesis defence. Inusah’s committee included Simpson, and supervisors in South Africa and the United States.

Inusah is now teaching part-time at the University of Ghana and has been applying to post-doctoral fellowships.

As for Simpson, he will be flying back to Ghana in spring, 2017.

“The university in Ghana has a legacy of the British post-secondary education system — it’s a hybrid,” says Simpson. “In the United Kingdom, it used to be that year-end exams would be bundled up and sent to another university for marking — there’s a sort of musical chairs of exams being sent around and marked.”

The approach attempts to standardize and remove influence from exam marking, Simpson explains. Because Ghana only has three state-universities in the country, the university’s administrators ask academic visitors — such as Simpson — to help examine the university’s exams.

“I’d love to see more connections with Ghana — the students there are smart and education really makes a difference in the lives of those who graduate from university,” says Simpson. “It really does move people up from poverty to the burgeoning middle class.”

In addition to his return to Ghana, Simpson and his partner are already making plans for their next adventure.

“Ideally, we like to live somewhere and not just be tourists,” says Simpson.

“When I was an undergrad, I don’t remember there being opportunities to study abroad,” says Simpson. “But travel is pretty easy. You can always manage to figure things out.”

Laurier has partnered with universities all over the world — currently 65 schools in 25 countries — to offer exchange programs to current students. Learn more about Laurier’s Student Exchange Program and other exchange opportunities through Laurier International.