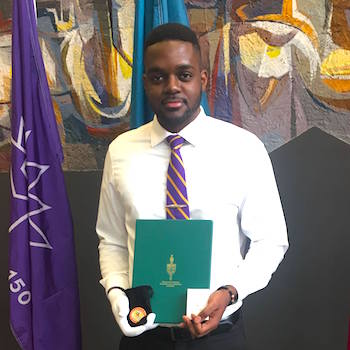 Tarique Plummer wants to one day be prime minister of Jamaica. He has been working toward that goal since he was in Grade 6, with all his choices geared toward building his capacity, character and leadership skills. Though he came to Wilfrid Laurier University as an international student only a little more than three years ago, he has now been recognized at the national level for the contribution he has made to life in Canada.

Plummer, a fourth-year student in Biochemistry/Biotechnology, recently received a Canada 150 Sesquicentennial Award of Recognition from Kitchener Centre MP Raj Saini, in the “engaging and inspiring youth” category. The awards, held at the Kitchener Public Library on Dec. 9, honoured 16 residents of Kitchener-Waterloo and five community groups.

Plummer didn’t know about the award until two weeks before the ceremony, when he received a call from Saini. It turned out he had been nominated by a friend he worked with at Africa Camp, a youth summer camp run by Waterloo-based organization Life Change Adventures. Plummer was a volunteer leader two summers ago and camp director last summer. He says he feels honoured by the award but doesn’t do what he does for the plaudits.

“When I volunteer, I don’t ask to be recognized,” says Plummer. “I do it because I enjoy the process, I do it because if I were in the shoes of the individuals who might require a bit more attention or support, I’d want someone to invest time and effort in me as well.”

In addition to his work with Africa Camp, what has Plummer done over his years at Laurier to deserve such an honour? How about serving as:

How does Plummer find the time to do it all, as well as keeping up good marks in a demanding undergraduate program?

“I don’t sleep much,” he says, laughing a little but clearly not joking. “When I leave Laurier, I want to be satisfied with what I did, the people I met, the opportunities I’ve had and the experiences I’ve had a pleasure of being part of. Maximizing every second is important to me.”

Plummer will graduate in the spring and his plans for the immediate future are still up in the air. He may run for president of the Students’ Union. He may look for work. Or he may do a master’s degree in supply chain management at the Lazaridis School of Business and Economics – a departure from biochemistry but something he has discovered a love for. He is currently doing an independent study course with Professor and CN Fellow in Supply Chain Management Michael Haughton, concentrating on supply chain management in the health care sector.

Haughton, who also supervises Plummer as a Lazaridis School research and conference planning facilitator, says Plummer is outstanding whether as a student, employee, volunteer or leader.

“Because Tarique is a busy full-time student, his sacrifice in making the time for community work speaks volumes about his commitment to help others,” says Haughton. “It was very gratifying that this commitment and the impact of his work were recognized with this award.”

Regardless of what he ends up doing when he graduates, Plummer hopes to stay in Canada awhile longer – perhaps long enough to complete a PhD. However, he has no intention of losing sight of his long-term goal in Jamaican politics. Despite the cold winters, a lengthy Canadian sojourn is part of the plan.

“I believe that in order for me to truly make a difference, I must bring to the table something new,” says Plummer. “How can I say I want to change or impact the system if I’m a product of that system? I came to Canada because I wanted to learn what Canada does, why people here are so happy, why systems here are so efficient, so I can see what could be a model for Jamaica.”