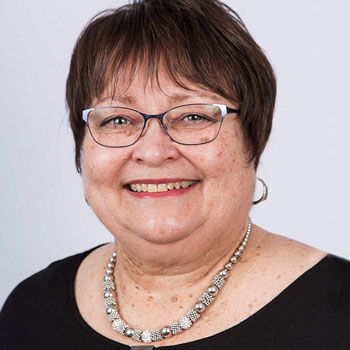 From criminology lessons in Brantford to North American Studies courses in Waterloo, Debra Nash-Chambers has made valued contributions to students’ learning at Wilfrid Laurier University.

This past year, her commitment to education was honoured with a Laurier teaching award for Sustained Excellence. “It’s quite remarkable and gratifying to know that my students nominated me for this award,” says Nash-Chambers. “It’s rewarding knowing that they think so highly of you.”

“Dr. Nash-Chambers was the first professor who worked to connect with me on a personal level, and her support and caring consideration for our wellbeing boosted my confidence as an individual and benefited my undergraduate career immeasurably,” says Isaac Hewitt-Harris, a former student of Nash-Chambers who will start graduate studies this year at Laurier.

Nash-Chambers joined Laurier as a part-time instructor in 2005, after finishing her PhD and teaching at the post-secondary level for a number of years in the United States. Her areas of expertise include American and Canadian history, with a particular focus on social history.

Over the past 12 years, Nash-Chambers has been teaching in several departments at Laurier, including in the Department of History, as well as programs such as Criminology and North American Studies, where she covers topics like crime and constitutional law, and the business, cultural and political relations between America, Canada and Mexico.

“I have a very dynamic relationship with Laurier,” says Nash-Chambers. “I like the atmosphere here — there’s a strong rapport between colleagues, good mentoring that occurs, and I’ve been really lucky to engage with wonderful students.”

In all her courses, Nash-Chambers stresses the importance of learning good communication skills for life after university, yet she does not hesitate to adjust her teaching approach when necessary — adapting to department curriculum goals and pedagogies.

"The faculty at Laurier continue to research and participate in conferences, but teaching has been and remains a top priority throughout the university and all the departments I’ve taught in."

“Experiential learning is popular across all departments at Laurier,” says Nash-Chambers. “Students are willing to have a more hands-on type of experience rather than just being lectured to, so it’s nice to adapt. Through exercises like group projects and class discussions, engagement levels increase and the learning experience of students is enriched.”

In many of her classes, Nash-Chambers introduces students to social justice issues — the dynamics of racism and gender, for example. In a North American Studies course, she uses the interactive KAIROS blanket exercise, which brings to light the history of colonization in Canada, and the historic and current relationship between Canada’s Indigenous and non-Indigenous peoples. In the exercise, participants go through the colonization, treaty-making and resistance experience of Indigenous peoples by standing on blankets that represent land.

“The blanket exercise shows how vast First Nations’ territory was contracted down to tiny islands of treaty lands through conquest, disease, and the creation of the reserve system,” she says. “It’s a very powerful lesson that leaves students quite stunned at how history has impacted Indigenous culture.”

Beyond in-class work, Nash-Chambers created a course that gave students meaningful hands-on experience through field trips and 10 weeklong internships at local archives, libraries and history museums throughout Wellington County and the Waterloo Region.

“We hear from archivists who explain the curation process and the purpose of these important historical institutions,” says Nash-Chambers. “Students get really excited to see the tangible historical records we have.”

Some of her students who have taken the class have been able to find employment through the experience they gained during their internship.

Nevertheless, Nash-Chambers does not see herself as the exception.

“The faculty at Laurier continue to research and participate in conferences, but teaching has been and remains a top priority throughout the university and all the departments I’ve taught in,” she says. “I have an interdisciplinary background and I love to teach — that I’ve been afforded the opportunity to engage with students at Laurier in different departments has been really rewarding,” she says. “I’ve been able to spread my wings.”