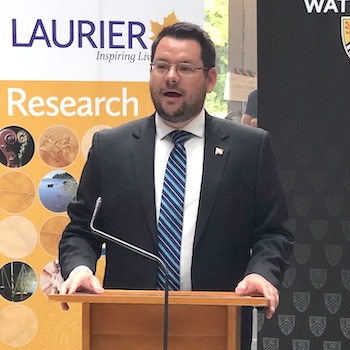 Akesson is receiving $140,000 for her project, “Families Under Fire: Practices, Rights, and Well-Being in Contexts of War, Displacement, and Resettlement.” Horsman is receiving $97,651 for his project, “Mass Spectrometry for Dissecting Phosphonate Tailoring of Bacterial Cell Surfaces.”

“Professors Akesson and Horsman are emerging leaders in their respective fields of international social work and green chemistry,” said Jonathan Newman, Laurier’s vice-president: research. “This provincial funding will allow Professor Akesson and her team to deepen their understanding of how families experience war, displacement and resettlement, while Professor Horsman and his team will gain a valuable tool to help them in research that could help solve problems both related to antibiotic resistance and polluting chemical methods.”

Akesson, who has been a faculty member with Laurier’s Faculty of Social Work since 2014 and won a Laurier Early Career Researcher Award in 2018, has quickly gained a reputation as a prolific researcher whose work has global impact. Recently, with funding from the Social Sciences and Humanities Research Council of Canada, she has been researching the experiences of Syrian refugee families living in Lebanon and created an interactive website to communicate that work in an innovative and accessible way.

Now Akesson is shifting her focus to Syrian refugee families living in Canada. Her project will use place-based and family-centred methodologies to understand how 40 families experienced war, displacement and resettlement in Canada. The research will examine topics including how these experiences shaped family well-being and practices such as parenting, as well as family and children’s rights and the role of social supports. In addition to traditional academic outputs such as journal articles and conference presentations, she plans to produce another interactive website and a webinar series targeting settlement practitioners and policy makers.

“This research will inform policy and practice to assist families in Canada that have experienced significant challenges in the contexts of war and displacement, as well as help develop effective research methods for use with vulnerable populations,” said Akesson. “The provincial funding will allow me to work with and train undergraduate and graduate research assistants as well as to engage refugee youth through the creation of a youth council that will help guide the research and its dissemination.”

Horsman has been a faculty member with Laurier’s Department of Chemistry and Biochemistry since 2011. Much of his research focuses on using enzymes as greener alternatives to traditional biochemical manufacturing methods, which are often energy-intensive or toxic. As part of this research, Horsman is working to identify new phosphonates, which are molecules with a carbon-phosphorus bond. The research could enable the discovery of new biocatalysts for green chemistry and pave the way for developing agents to mitigate increasing antimicrobial resistance.

With the funding, Horsman plans to purchase a state-of-the-art mass spectrometer, a sophisticated tool that sensitively detects molecules and measures their mass. The instrument will allow him and his team to detect diverse chemicals in a sample, including the phosphonates that some bacteria use on their cell surfaces for reasons that are somewhat mysterious. The federal Canada Foundation for Innovation previously pledged $97,651 toward the purchase of a mass spectrometry suite; the provincial funding matches that.

“Microorganisms are masterful chemists,” said Horsman. “Modern analytical techniques – mass spectrometry being foremost among them – are only beginning to reveal a massive microbial potential to assemble a staggering array of molecular scaffolds. Being able to purchase a mass spectrometer will help me, my colleagues and students discover new molecules and understand how they are made in nature. This could have implications for solving the problem of antibiotic resistance as well as for green chemistry.”