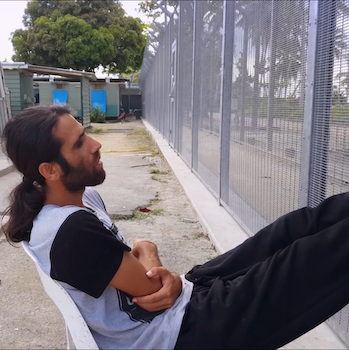 Waterloo – Journalist Behrouz Boochani fled persecution in Iran in 2013, hoping to make it to Australia. He ended up detained on Papua New Guinea’s Manus Island. His film, Chauka, Please Tell Us the Time, depicts life there. Wilfrid Laurier University’s International Migration Research Centre (IMRC) is hosting Boochani and his filmmaking partner at the Canadian premiere of the film, Thursday, Sept. 19 at 7 p.m. in the CIGI Auditorium at the Balsillie School of International Affairs in Waterloo.

Boochani shot the footage clandestinely on WhatsApp and created the film in collaboration with Netherlands-based filmmaker Arash Kamali Sarvestani. Both Boochani and Sarvestani will attend the screening to answer questions – via video conferencing in Boochani’s case because he is still on Manus Island. The event is open to all and there is no charge for admission.

“This is an exciting opportunity for our community to engage with a pressing global issue and speak directly to people who are living it,” said Alison Mountz, director of the IMRC and a Laurier professor of geography. “Chauka is a really important film because normally, when people are held in detention, they’re hidden from view, even more so when they’re in detention on a remote island because Australia doesn’t want to allow asylum seekers onto their shores to process their claims.”

Boochani is also the author of a memoir, No Friend But the Mountains, written one text message at a time from Manus Island. Despite the multiple prestigious literary awards the book has won, Boochani has been unable to attend any of the awards ceremonies in person.

The Manus Regional Processing Centre, where the film was shot, closed in 2017, but hundreds of asylum seekers were moved to other accommodations on the island, where most, including Boochani, still remain.

The film fits in with some of the major themes of IMRC research. For example, Mountz, who is Canada Research Chair in Global Migration, researches migration by boat, detention on islands and the offshoring of asylum claims, while Kim Rygiel, associate director of the IMRC and a Laurier professor of political science, researches the role of the arts in integrating newcomers into communities.

“The arts can be powerful vehicles for immigrants and asylum seekers to claim space and recognition in society, to define themselves rather than being defined through media images,” said Rygiel. “This film is important because many people believe that the international system of refugee resettlement works – you just need to follow the system and make a claim. But it doesn’t work that way for many people, because many governments are now putting up barriers like offshore detention that make it harder for people to access the territories where they can make asylum claims.”

The Canadian premiere in Waterloo will be the first in a series of screenings of the film across Canada. For more information, including a movie trailer, see the Chauka, Please Tell Us the Time page on Facebook. Register for the free screening at the Balsillie School through Eventbrite.