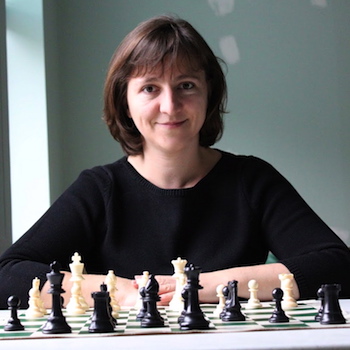 Waterloo – Interested in being one of 30 people playing a chess master at the same time? Or just watching? On Tuesday, March 13, Wilfrid Laurier University’s Faculty of Science and Centre for Women in Science (WinS) are hosting a simultaneous chess exhibition by Natalia Khoudgarian, who holds the Woman International Master title of the World Chess Federation.

WinS is hosting the event “to celebrate successful women,” said Shohini Ghose, director of the centre and an award-winning physics professor. “Chess has been traditionally viewed as a test of intellectual ability, so celebrating a woman chess master is a way to celebrate the fact that women can excel in all fields including intellectual excellence. Besides, it’s a fun activity that will raise awareness of WinS among chess lovers who may not know about the centre.”

Khoudgarian has represented Canada twice each at the Women's World Chess Championship and the Women’s Chess Olympiads and is a four-time winner of the Canadian Women's Championship. She will be available for informal chats after the simultaneous games.

Anyone of any age or ability level can be one of the 30 to play against Khoudgarian. To register as a player, email Hasan Shodiev (Laurier Chess Club) at hshodiev@wlu.ca before March 8. Spaces are allotted on a first-come, first-served basis and there is no fee.

The event takes place from 1-3 p.m. March 13 in the Science Building Atrium on Laurier’s Waterloo campus. There is no need to register to be a spectator. Coffee and social time with Khoudgarian will follow from 3-4 p.m.