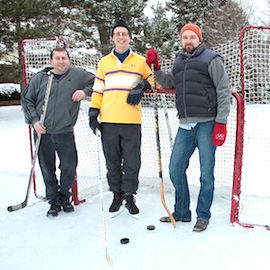 WATERLOO – RinkWatch, a citizen-science research initiative led by Wilfrid Laurier University faculty members Robert McLeman and Colin Robertson, has joined with the National Hockey League as part of NHL Green’s commitment to ensure all levels of hockey, including hockey played on outdoor rinks, are available for future generations.

Since its launch in 2010, NHL Green™ has been committed to promoting sustainable business practices across the league as well as preserving the environment, including the frozen ponds that inspired and cultivated the game more than 100 years ago.

“We are so excited to be associated with NHL Green,” said Robertson. “They have been great supporters of RinkWatch and will help us reach a wide audience with our research.”

“The NHL is making genuine efforts to become a leader in corporate environmental responsibility, which fits well with Laurier’s commitment to leadership in environmental research,” said McLeman.

“Hockey in Canada can be traced back to humble beginnings on frozen ponds,” said Kim Davis, NHL executive vice president, Social Impact and Growth Initiatives. “A lot of NHL players grew up playing hockey outdoors. It’s such a critical part of the game and it's important that access remains available for future generations.”

Launched at Laurier in January 2013, RinkWatch offers people who love outdoor skating the chance to help environmental scientists monitor winter weather conditions and study the long-term impacts of climate change. RinkWatch users do so by submitting information about skating conditions on outdoor rinks in their neighbourhoods to the RinkWatch website.

The results highlight the value of engaging citizens in environmental research. Using data submitted by RinkWatch participants, the researchers have been able to show that the number of days cold enough for outdoor skating in a typical Canadian winter could decrease by 34 per cent in Montreal and Toronto and by 20 per cent in Calgary over the course of this century as a result of climate change. RinkWatch has also generated valuable information about what motivates people to build outdoor rinks and the important social benefits they bring to communities.

The National Hockey League released its 2018 Sustainability Report during the first-ever NHL Green™ month. The report is available on NHL.com/Green, and includes highlights from studies generated by the RinkWatch project.

NHL and the NHL Shield are registered trademarks and NHL Green name and logo are trademarks of the National Hockey League. All Rights Reserved.